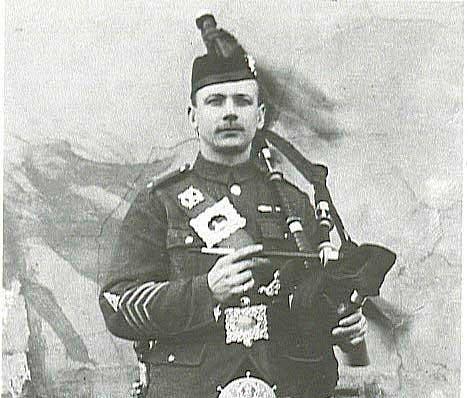 Pipe Major James Robertson was born in August 1886 in Portsoy, Banffshire, and grew up in Lanarkshire, where he began to learn the bagpipes aged fifteen from Pipe Major William Sutherland of Airdrie. In 1906, he enlisted in the Gordon Highlanders, and was promoted to Lance Corporal in 1912, and then to Pipe Corporal in 1913.

In August 1914, he was sent to France with the 1st Battalion of the Gordons as part of the British Expeditionary Force. Two weeks later, only two of the eighteen pipers in the Battalion had escaped death or capture, and James Robertson spent almost the entire war as a prisoner. It was during his time as a Prisoner of War in Sennelager near Paderborn that he composed his most well-known tune, 'Farewell to the Creeks'. The tune was about the Creeks of Portknockie on the Moray coast, and was to inspire the tune for Hamish Henderson's 'The 51st (Highland) Division's Farewell to Sicily', which Henderson composed during the Second World War, and which was in turn to inspire Bob Dylan's 'The Times They Are A-Changin''.

After serving in Malta and then being based in Aberdeen, he left the military in 1927, and worked as a janitor at the Banff Academy until 1953, and was a Special Constable in Banff, achieving the rank of Sergeant. He was also involved in the Turriff and District Pipe Band, alongside Pipe Major George Hepburn [ID 1843], who was also recorded by Hamish Henderson in 1952. James Robertson died in 1961 at the age of 75.

The Kist o Riches website has nine recordings featuring Pipe Major James Robertson, recorded in 1952 by Hamish Henderson for the School of Scottish Studies. In the recordings he speaks about his life, about the war, and about his compositions. He also speaks about the Turriff and District Pipe Band, in which he was involved alongside Pipe Major George Hepburn, who also features in these recordings.

Tom Peterkin, 'The Hunt for relatives of north-east piper who inspired Bob Dylan', The Press and Journal, 1 April 2020, https://www.pressandjournal.co.uk/fp/news/politics/scottish-politics/2113873/column-the-hunt-for-relatives-of-north-east-piper-who-inspired-bob-dylan/ (accessed 19 May 2020).