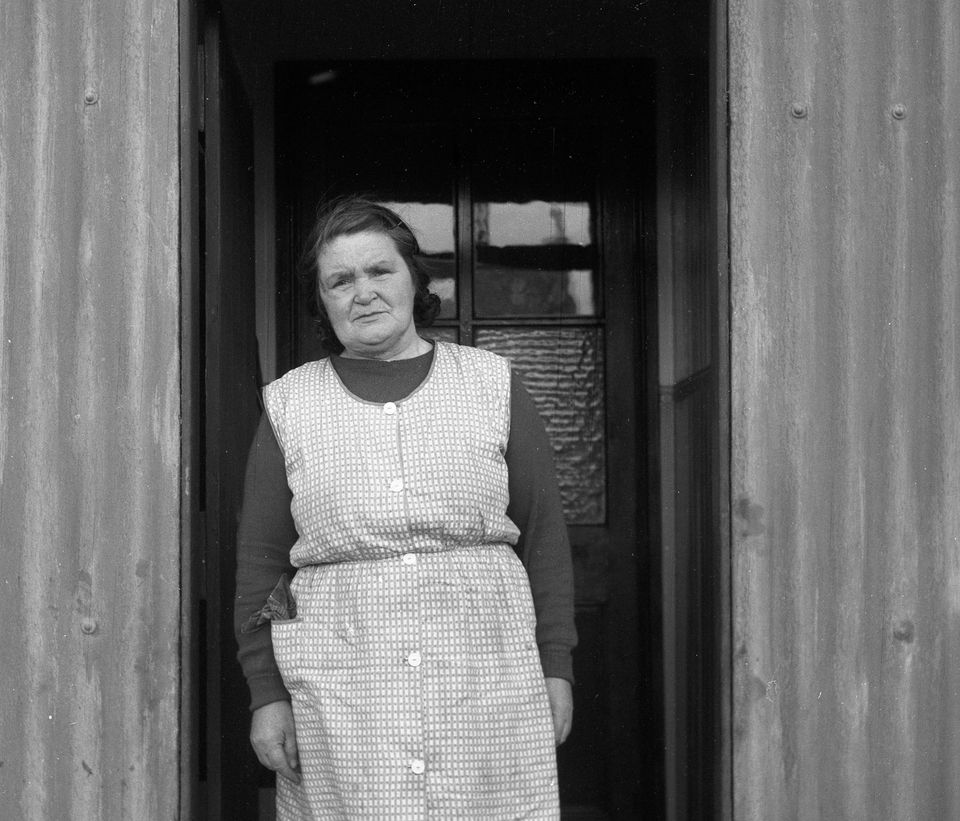 Nan MacKinnon (Nan Eachainn Fhionnlaigh) was a tradition-bearer from the island of Vatersay whose remarkable memory, enthusiasm, and love of the Gaelic oral tradition has ensured that her wealth of knowledge has been preserved and shared with future generations.

Born in Kentangaval in Barra, Nan was the youngest of seven children. Her father, Hector (Eachann Fhionnlaigh), was also born and raised in Kentangaval, and was descended from the MacKinnons of Strath, Skye – the historic grazing constables to the MacNeils of Barra until the 19th century. Nan's mother Mary was from Mingulay, and had strong connections with the MacPhee family, who – according to local tradition – came to settle in Barra in the 14th century.

Nan grew up in what was a politically tumultuous time in the Highlands, and this influenced her early life greatly. Despite having won security of tenure twenty years before Nan was born, there remained a strong sense of injustice at the uneven distribution of land in the Highlands. Having spent her early years in Barra, in 1907 Nan's father was part of the 'Vatersay Raiders' – landless cottars from Barra and Mingulay who carried out a land raid on Vatersay, establishing crofts on the neglected land. Despite the eventual failure of the Land Raid, Nan's family were eventually given a croft in Baile, Vatersay following the purchase of land on the island by the Congested Districts Board.

Nan's repertoire was among some of the most extensive and varied of her generation, and this is reflected in the recordings of her featured on the Tobar an Dualchais website. She came from a rich musical tradition, and was said to know around 400 songs by heart, most of which she learned from her mother.

After receiving her schooling on the island, Nan left home when she was seventeen and – as was common for women of her age at the time – spent a number of years in service for a variety of people in Argyll. She also worked at the herring for a time, in both Shetland and Yarmouth before going to Glasgow. One of her sisters died suddenly in 1940, leaving four young children and a husband who was away at sea for long periods. Nan returned home to Vatersay to raise the children and remained there for the rest of her life.

Nan had a great fondness for the stories and songs she knew, and she was convinced of the importance of the oral tradition to Gaelic communities. Growing up she would spend hours practising them until she knew them in their entirety. As Nan herself commented: "[Each story] tells the ways of the people that lived in those days. The waulking songs kept news alive from generation to generation. There were no newspapers, whereas today we read it in the papers and forget about it tomorrow. But the songs kept it alive. Those happenings that happened centuries ago are still to be told in song and story. It's wonderful."

Over and above her repertoire of songs, Nan was also well known for her tales and legends – often of a supernatural nature – and her captivating story style. She also had a deep knowledge of the traditions of Uist and Barra, and was recording speaking about a variety of subjects from cures to feast days, to interpretations of omens and dreams. Her knowledge of the material culture of her native island was also extensive, and her recordings include discussions about traditional diet, including about what would be eaten when food was scarce.

There are almost 1,000 recordings of Nan on the Tobar an Dualchais website, the earliest dating back to 1953 when she was recorded by Donald MacPherson for the Canna Collection. James Ross from the School of Scottish Studies visited her in 1956 and recorded her a number of times over the subsequent five years. Fellow fieldworkers such as Donald Archie MacDonald, Ian Fraser, Elizabeth Sinclair, Rev. William Matheson, and Barbara McDermitt also recorded her.

James Ross summed up her significance as a tradition-bearer by saying: "Nan is the type of person that the folklore and folk-song collectors dream about. There is absolutely no trace of 'memory effect' as she responds to queries … Her answers are always a direct affirmative or negative, usually … the former. She never has to search her mind, and this, together with her unstinting co-operation, endless patience and subtle sense of humour, made the work of collecting a joy."