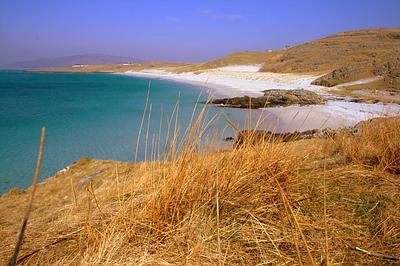 Liam Alastair Crouse, a PhD student at Sabhal Mòr Ostaig UHI, explores stories of Bonnie Prince Charlie in Eriskay and South Uist on the 275th Anniversary of the Battle of Culloden

On landing in Eriskay at the southern end of South Uist in the Outer Hebrides, Bonnie Prince Charlie is said to have reached into his pocket and cast a handful of seed upon the ground at Coilleag a’ Phrionnsa. The beautiful flowers, a pink Convolvulus, took root and have grown on the dunes ever since. Though many have tried, they will not grow in any other soil, as explained by Ruairidh MacKinnon (TAD ID: 42050).

Some of the readers may be familiar with the story. It is among the numerous pieces of folklore associated with Bliadhna Theàrlaich - the Jacobite Rising of 1745. After failing to persuade Alexander MacDonald of Boisdale in South Uist to join the Prince’s campaign, Charles Edward sailed to the mainland and raised his banner at Glenfinnan. Or so the story goes.

But MacKinnon’s account is not set in 1745. It is 1746 and the Young Pretender is on the run in the Outer Hebrides after the calamitous defeat at Culloden Moor, exactly 275 years ago. MacKinnon describes how, having escaped soldiers while staying in a cave in Èiseabhal, a hill in the Southend, the Prince came to Eriskay by way of Gleann Dàil.

This narrative, which places Charles Edward in Eriskay after Culloden, is repeated in several other accounts collected in the area. Recordings in the Tobar an Dualchais digital archive trace his route from Èiseabhal to Eriskay, before returning to South Uist (John Campbell 38545) through Smeircleit and the machair townships (Calum MacRae 44726).

While the trail of the Prince’s sojourn in Uist is patchy, oral history remains one of the primary sources of information through the spring and summer of 1746. Yet some accounts are conflicting and overall they do not offer a linear chronology.

There have been several attempts to straighten out this jumbled record. Walter Blaikie, a leading scholar regarding the 1745 Rising, compiled the most detailed account of the Prince’s itinerary in Scotland. He places Charles Edward and his companions in the vicinity of Loch Baghasdail between 15-20 June, 1746, stating that they ‘remained in the neighbourhood for several days’. If the Prince visited Eriskay a second time, this is when he did it.

Following Blaikie’s 1897 publication, Dr Alasdair Maclean, a GP practicing in South Uist for many years, set out to flesh out some aspects of the story by aligning written records with the oral traditions remembered in Uist. In his book, A MacDonald for the Prince (Acair, 1982), Maclean recounts how the party was in Calbhaigh while Neil MacEachan, one of the Prince’s loyal attendants and the father of Marshal MacDonald, the Duke of Tarentum, made his way to MacDonald of Boisdale for provisions and word about their escape to France.

With the landing of a force of regulars at MacDonald’s residence in Cill Bhrìghde and the appearance of two warships in the Minch, the Prince’s band fled to the cave now known as Uamh a’ Phrionnsa, or The Prince’s Cave, in Bealach an Easain to the north of Beinn Ruigh Choinnich. It was in this cave that plans were made to smuggle the Prince ‘over the sea to Skye’ disguised as Flora MacDonald’s female servant.

Returning to the recordings available on Tobar an Dualchais, I would like to explore several examples of folklore associated with the Prince in the Southend and Eriskay. One aspect already touched upon is historical accuracy. In the above legend, it makes little sense that Charles Edward carried a sachet of bindweed seeds with him throughout the campaign and while on the run. The legend of the Prince’s Flower likely dates from 1745.

But that does not discount the rest of MacKinnon’s information. There are parts which may well be true. Did the Prince stay in a cave in Èiseabhal, for example? It is possible that the Prince and his companions ranged the hills for a better vantage point of their would-be captors given the time they spent around Loch Baghasdail. Blaikie mentions that the Prince took to the mountains until night. Indeed, the people of Taobh a Deas Loch Baghasdail still tell of a cave in the hill where the Prince hid.

John Campbell says that the Prince was in an unpopulated Eriskay for a long time and that he constructed a wall of perfect masonry, close to where he planted the flowers in the dunes of Coilleag a’ Phrionnsa (38545). Rather than an empty island, Donald MacMillan describes the inhabitants, a family of Camerons, who accommodated the Prince in their home during his first night in Scotland (20015). Donald’s account describes the thatched house situated above An Tràigh Leis, still pointed out today as the site, and broadly agrees with today’s oral tradition.

According to some of the Tobar an Dualchais accounts, the Prince returned to South Uist after his time in Eriskay. John Campbell says that he made for the hills (38545). This agrees with Dr Maclean’s sequence of events which follows the party to Uamh a’ Phrionnsa.

Calum MacRae, however, maintained that he made his way west through the machair townships (44726). He explains that a track, called Rathad an Rìgh, or the King’s Road, between Smeircleit and Geàrraidh na Mònadh was so named after the Prince travelled that way. This is probably untrue, as the track was likely constructed to provide croft access in the nineteenth century.

Collected in the mid-twentieth century, the communal memories captured in the Tobar an Dualchais archive help to shed light on this thinly documented chapter of the Jacobite Rebellion. The accounts also provide snapshots of an organic oral tradition – one which continues to be told and transmitted today.

They offer a direct insight into the Prince’s flight in Uist 275 years ago – the landscape in which he sheltered, tales of numerous near-misses and most importantly, the people who gave assistance freely to a man in dire straits. Some of the accounts are true, some are unconfirmed, and others are likely to be fictitious. But they remain, in this part of the Outer Hebrides, as some of our only sources of information.