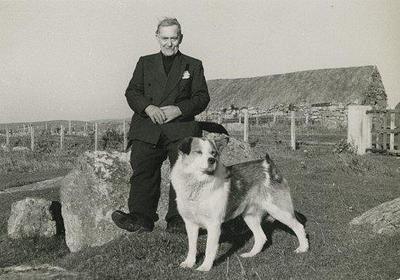 Dr John Shaw is an Honorary Fellow in Celtic and Scottish Studies at Edinburgh University where he spent much of his career. One of the worlds’ foremost scholars of Gaelic oral traditions, he conducted extensive fieldwork in both Cape Breton, Nova Scotia and Scotland. He recalls, through the material available through the Tobar an Dualchais project, his visit to the Hebrides sixty years ago….

Below is a first-hand account of visits made during the summer of 1961 to Gaelic-speaking tradition bearers and field collectors in Canna and South Uist whose materials are now recognised as major contributions to the Tobar an Dualchais/Kist o Riches project. I have drawn on an intermittent diary kept at the time, to help with my present memories of the occasions.

For a high school student arriving from the American Midwest in June six decades ago this year, spending the summer on the Isle of Canna (Eilean Chanaigh) as a guest of the laird, John Lorne Campbell (Fear Chanaigh), was by any standard a memorable experience. Campbell, a leading Gaelic scholar already well known internationally, had from the 1930s carried out ground-breaking fieldwork recording Gaelic oral tradition in the Hebrides and in Gaelic Nova Scotia. My own objective was to learn to speak Gaelic, a language I had not heard until I set foot on the island, which in those days was almost entirely Gaelic-speaking. Canna House, where Campbell lived with his wife Margaret Fay Shaw, had much else to offer: a well-stocked Celtic library (a no-go area for the two Siamese cats), and just as important, a series of Gaelic and literary visitors, arriving from all over western Europe and North America. Conversations at the dinner table were always lively.

One afternoon, as he was making transcriptions of sgeulachdan (traditional tales) from tape, Campbell mentioned that the reciter, Angus (‘Aonghus Beag’) MacLellan of South Uist was still living, and though up in years was one of the best ever recorded and well worth visiting. South Uist and Barra, where my hosts had carried out much of their pioneering work, by that time had attracted folklorists – Gaelic-speaking and otherwise – for generations. A century before, John Francis Campbell of Islay and Alexander Carmichael had collected extensively there; as early as the final years of the 17th century the Skye ethnographer Martin Martin remarks on the quality of South Uist Gaelic.

Campbell had provided letters of introduction to his main Gaelic contacts. Shortly after being warmly welcomed into a very patient household in Loch Eynort, South Uist, I set out for Bornish to call on Agnes Currie, housekeeper to the parish priest, well known for her large repertoire of Uist songs, mouth music, and prayers. Returning through Bornish, I took the opportunity to stop in at the croft of Allan MacInnes, who had just returned from shearing sheep on Canna. It was a lively household, with his wife, handsome daughters, and a son, Cailean (‘Cailean Ailein Bhig’ [Fr Colin MacInnes]) of my own age, who was later to receive widespread recognition from his exemplary community work in Ecuador. The following day I found a lift towards Daliburgh to visit the storyteller Angus MacLellan in Frobost. The entry from the diary kept intermittently at the time reads (11.08.61):

I got there about 1:45 and met Bean Nèill [his older sister], who told me she had no English but volunteered that she could understand the radio sometimes. After about 10 minutes Aonghus himself came in (he had been outside digging potatoes) and sat down near the fire. We started a conversation about the weather, how bad the summer was, etc… After about ½ hour Bean Nèill asked him to tell a story… His style of reciting was remarkably varied and interesting; he never paused until the end of the story. I stayed there until 4:30, and then left to catch the bus. The bus schedule had been changed, but I managed to get a ride to Lochboisdale without much trouble.

As I left, Bean Nèill gave her advice and encouragement in two words: Cùm oirre ‘keep going with it’. At the time, the conversation and the story stretched my Gaelic to its limits (or beyond), but I was able to retain enough of Angus MacLellan’s story to find it later in his autobiography Saoghal an Treobhaiche (Gaelic version ed. JL Campbell, 1972).

By great good luck, Donald Joseph MacKinnon (‘An Eòsag’), captain of the Lochmor (the mail steamer that served Canna, Uist and other islands) was at home in Lochboisdale that evening; his son Roddie had been staying in Canna that summer. Born and raised in Barra, he was recognised as an outstanding traditional singer whose father, Ruairidh Iain Bhàin, was recorded by Campbell in the 1930s. Donald Joseph and his wife pressed me to stay for supper, and an eventful day was rounded off by the dance that night in Benbecula.

Over the following two weeks visits were made to the cottage of Peigi and Màiri (‘Peigi is Màiri Anndra’) MacRae, Glendale, where Margaret Fay Shaw had lived and taken down many of the songs in her collection Folksongs and Folklore of South Uist – during my visit their piatan (pet lamb), who was said to enjoy the occasional taste of whisky, had the run of the comfortable interior. A further evening worth remembering was spent with with Dr Alasdair MacLean (formerly of Raasay and brother to Calum, Sorley and John) in Daliburgh and his wife Rena; he was generous with his information and played recordings of songs that he had collected on the island. I was also fortunate to meet John MacInnes (‘Iain Pheadair’), from South Lochboisdale, the Town Clerk, who willingly sang and was tactfully helpful with pronunciation.

During a short stay in Barra, I walked up the Glen to call on Annie Johnston (‘Anna Aonghuis Chaluim’), a close friend of the Campbells, whose address was already a frequent destination for folklorists. After our initial conversation she led me out to weed in the garden - her way of ensuring that visitors would remember any lore she provided. When I stung my hand on the nettles, she said to apply a leaf of dock growing nearby. It gave instant relief, and she observed that the two plants were never far apart. She then recited a rhyme which I did not remember as well as I should have, but was able to recover years later from a neighbour from the Glen:

The nettle has stung me’

The above Uist and Barra people from 1961, so generous in those days, have made lasting and major contributions to Tobar an Dualchais/Kist o Riches. Three decades later, when the project was only in its initial stages, John Lorne Campbell was approached about making available his extensive collection of field recordings to this national resource. As a long-time a lover of technology as well as Gaelic traditions, he agreed without a moment’s hesitation.