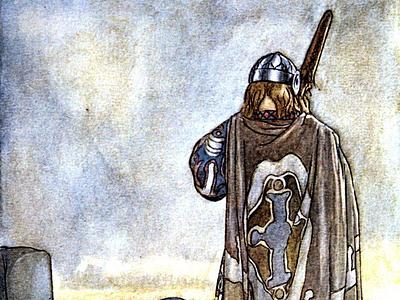 Reality, for many people just now is not easy to contend with, and for many in the past it was equally and perhaps more constantly difficult. That may explain why story-telling and mythology were so highly prized. They offered mental relief. One could escape into a fantastic world and forget current miseries. I have never played a computer game, but I suppose they partly fulfil the same function.

A lot of the old mythological tales were sung by memory. Some were very long, and in Iceland skalds were able to memorise thousands of lines. In Scotland too, long tales were remembered and sung, their origins often in the mythical world of the Gaelic warrior band, the Fenians. Several of these Fenian lays –Laoidhean na Fèinne – were recorded on disc and tape in the twentieth century and can be found in Tobar an Dualchais, but I want to tell you about one that was written down before audio recordings were used in fieldwork, and by an American: Amy Murray. A great deal of fascinating material survived only when written down and some of it has been revived by the best of Gaelic singers. When I made the two Scotland’s Music series for BBC Radio Scotland in 1991-92 and in 2007, many a singer brought material magically to life from the printed page, there being no other source.

The Fenian lay I want to tell you about is a version of the Lay of the Smithy – Duan na Ceàrdaich. It is related to The Lay of Caoilte - Laoidh Caoilte - and was well-known throughout the Gàidhealtachd. There are several recordings of it on Tobar an Dualchais and two of them, of Duncan MacDonald (24519) and Penny Morrison (50824), have musical similarities. But, to my ears, Amy Murray’s version is particularly good.

The lay is decidedly mythical. The sword belonging to Fenian leader, Finn, has been broken (how? that’s another story) and he and his band of warriors must go to a magic smith to have it re-forged. The smith in question is one-legged - a parallel to the lame god Hephaestus who is smith to his fellow Greek gods. Our smith is called Lon Mac Liobhunn and he is tall and wears a cloak of skins and to be allowed to visit his magic smithy, the Fenians had to undergo a spell and then try and follow him. This was not easy as he could cross the dark grey deserted glens, each one in a single step, leaving the Fenians to follow mere glimpses of his cloak over his haunches. They managed, however, and when they arrived one of their number, Daor-ghlas, was so strong and worked so hard in the smithy that he went redder than oak embers and succeeded in breaking the anvil. “Cò as thainig Caoilte gun tioma; Mhil oirn an t-innean cruadhach” –‘Whence comes the thin fearless man who has wrecked my anvil?’, demanded the smith. Caol means thin or slender – as in a narrow kyle such as Kyle of Lochalsh, so caoilte means ‘the thin one’ and ever after Daor-ghlas was called Caoilte.

The great thing about the version taken down by Amy Murray is that she notated the tune, and it’s powerful and fitting, only nobody sings it today. So who was she? She came from New York, won a 1902 competition “for the best rendering of a Gaelic song with Clarsach accompaniment” and had faced up to none other than the Principal of the Royal Academy of Music in London, Sir Alexander Campbell Mackenzie, telling him that Gaelic song needed no accompaniment. Most famously, she was the author of Father Allan’s Island. You could say she was pursuing the romantic Celtic dream, but with Father Allan and the people of Eriskay she found it, and it was no more a dream than was she herself. We should be immensely grateful to her. Her style of writing may seem slightly arch to some today, but none other than Padraic Colum was happy to write the Foreword to her book, full of praise for her writing skills. She was a kind of predecessor of Margaret Fay Shaw, that most redoubtable of ladies, made of Pittsburgh steel, chain-smoking and with a bourbon to hand and her beloved piano just across the room. We owe the Americans a great deal, for they have kept faith with us when we have occasionally been in danger of losing faith in ourselves.

Back to Duan na Ceardach which Murray entitled Ossianic Lay – which it is. I did have the chance to hear Amy Murray’s version sung just the once. I had organised an evening event for the Crannog Centre on Loch Tay and I and Graeme Lawson were joined by Maeve MacKinnon and she sang it by the firelight in the crannog with the simplest of accompaniment from Graeme’s lyre and our audiences were spell-bound. Meg Bateman found us some more verses with the right number of syllables per line to add to the two given by Amy Murray. It’s in J. G. Campbell’s Waifs and Strays of Celtic Tradition published back in 1891. As a scholar I love that title. Scholarship is full of waifs and strays with nowhere proper to live and Campbell, bless him, gave them an orphanage.

Here’s the music and the words of the first two verses in Gaelic as recorded by Murray. If you can’t play it or sing it yourself, get someone to help you. It has an uncanny feel to it once you get the flow. Be patient. It is not to be trifled with.

The Scottish modernist composer, Erik Chisholm, picked up on this music and made a piano piece of it and then arranged it for solo piano and orchestra. It’s stunning; moody and druidic, and the score was reproduced in International Piano magazine so pianists around the globe could play it. It’s on CD as a piano solo on Dunelm Records DRD0223 and also with orchestra on Hyperion, CDA 68208. It’s huge, mysterious, and composed with the deepest respect. So the classical musicians have got there first. As Amy Murray would have said, something needs to be done about that...

Next blog - A' Ghrian a Dannsa - Will you watch the sun dance? by Flòraidh Forrest

Previous blog - The journey of the swelling hag - by Liam Crouse