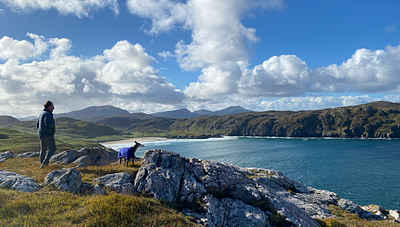 Artist in Residence: From the hearth to the heath

Lewis based Gaelic artist Mairi Gillies is currently artist in residence with Tobar an Dualchais. Here she provides an update on her creative journey so far. This residency has been made possible by funding from Skye and Lochalsh-based arts organisation, ATLAS Arts.

We stood watching the sea eagle being buzzed by gulls off the headland of Pabaigh Mòr (Uig, Lewis), from our outcrop vantage point they circled below us, lifting higher, catching unseen thermals until eventually, it moved off to a pinpoint in the distance. Aeronautic displays backlit by squalling showers coming in from the West. Uig is a place of much apparent beauty, full of colour and striking, picturesque landscapes. But there’s much more to be found here than the biscuit-tin worthy surface layers.

I was brought to this place by Iain Malcolm son of the late John Norman MacDonald, former sub-postmaster of Miabhaig, Uig. It was a recording of John, interviewed by Dr John Macinnes on Tobar and Dualchais, who told the story of ‘Iain Godha’, a piper from Cnìp in Uig that brought us alongside the white beach, over the fence, on past feannagan and fank, up to this high place.

In the track, John explains that Iain Godha didn’t burn or break his pipes when Calvanism became the prevailing religion, but hid them from the minister and took to playing them away from the village, in a cove.

Iain and I had set out to try to locate where Iain Godha might have played his pipes. We knew it would have to be far enough away from the village to hide the sound of the great highland pipes. No mean feat, but the landscape yielded answers in the form of cliffs, caves, high sided coves and inlets facing North with their backs to the village.

It was moving to stand there with the son of the man who knew this piper’s story and who had shared such rich accounts of life in Uig, twenty-four recordings in total, that covered such a wide and varied subject matter. Milking sheep, àiridh culture, springtime fowling on the Flannan isles, waulking cloth, how grazing lands alter the flavour of milk and butter from cattle, how to eke out corn in the lean months, growing on feannagan (lazy-beds), stories of exile and clan history. John’s entries in Tobar an Dualchais offer a multifaceted view into a landscape of culturally rich, biodiverse adaptations.

I took my own pipes with me, to meet John Norman Macdonald’s set. I sat in the former post office and let the pipes resound and shared stories and cups of tea with ‘Postie’. We collected waters from their local spring that will be used in a sculptural casting to reflect the stories, the people and their place-based knowledge. Casting can mirror piping with its ground and variations, it’s form and flow, it can offer a physical archive of form taken from place.

It’s by delving into the voices, language and stories of this place that the landscape becomes really alive to me and appreciable on a deeper level. The tracks lead me on, taking me by the hand into new places- from the hearth to the heath, and it will be through casting, replicating, shadowing and resounding that I shall respond.