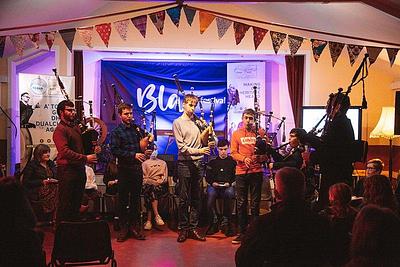 Tobar an Dualchais Events at Blas 2021

Tobar an Dualchais hosted three very successful vents as part of this year's Blas Festival. This annual festival offers a packed programme of live ceilidhs and concerts across the Highlands.

A concert was held in Inverness on Saturday 20 November in which Gaelic singers Julie Fowlis (accompanied by Éamon Doorley), Alasdair Whyte, Eilidh Cormack, and Còisir na h-Òige (Inverness Gaelic School choir) performed a selection of nature-related songs from the Tobar an Dualchais website. It was an excellent afternoon of beautiful singing.

Alasdair is from Mull and he chose songs associated with the island, including ‘An t-Sòbhrach Mhuileach’ nam measg. Here is a link to the recording from which he learnt the song.

Tobar an Dualchais hosted an online lecture on Wednesday 24 November delivered by Mairi MacFadyen and Raghnaid Sandilands. The lecture introduced listeners to Tobar an Dualchais in relation to local creativity, cultural ecology and environmental awareness. Mairi and Raghnaid gave examples of their own work as creative practitioners to show how these recordings can help strengthen cultural ties through community engagement.

On Saturday 27 November singers, musicians and dancers from the community of Kilmuir on the Isle of Skye gathered to perform songs and music from their local area, much of which they learnt from Tobar an Dualchais, including 'Òran a’ Mhotor Car’ and ‘Cha Robh Aon Dùnadh air Doras Choinnich Stiùbhart’.

It was really rewarding to see the youngsters singing songs from their own community, many of which had strong personal connections to them. The cèilidh included support from the Gaelic and Traditional Music course at Sabhal Mòr Ostaig who performed music from the island. Central to this event were two local cultural champions, Dinah Rankin and Calum Munro.

In addition to music, song and dancing, TAD produced a booklet with the lyrics of songs collected in the local area. The booklet was designed by Eilidh MacKenzie and printed by Atlas Arts.