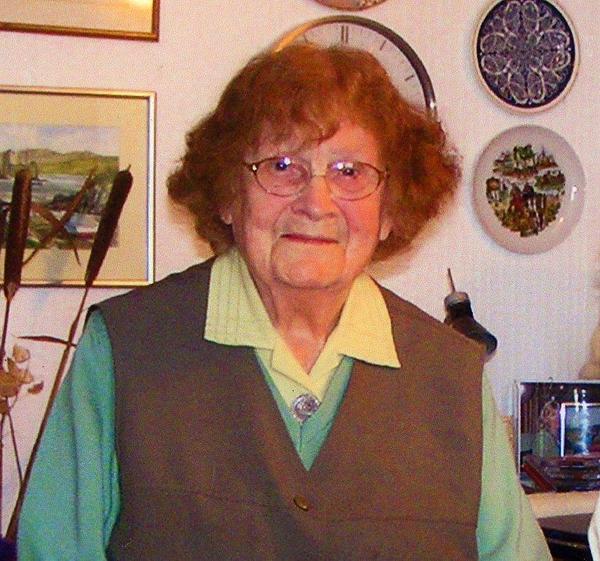 
When the new website was launched, a large number of new tracks were made available from contributors from Islay – the location of one of the last community events led by Tobar an Dualchais before the arrival of COVID-19 in the spring of 2020. Most of these recordings are those from the BBC collections – short interviews and contributions on Prògram Choinnich, covering a variety of topics, from agricultural shows to discussions on swimming pools and community gardens.

One remarkable woman who features in this list of new Ìleach contributors is Betsy West (née McNeill). Born in December 1915 in Portnahaven to Malcolm McNeill and Marion MacKinnon, Betsy was the youngest of four, of whom – tragically – only two survived until adulthood. She grew up on Queen Street, Portnahaven, speaking only Gaelic before starting school aged five, once remarking that the only English word she was familiar with before then was the word ‘no’.

Having completed her schooling in Bowmore, at the age of seventeen Betsy left the island for Glasgow where she trained as a nurse at the Western Infirmary, winning the gold medal for her year group, and going on to study midwifery, working in Glasgow until the early 1950s.

In 1950, Betsy married Fred West – a veteran of the Royal Navy – at Hope Street Free Church in Glasgow. Following their marriage, the couple moved to Fred’s native Aberdeenshire and settled in Fraserburgh, where Betsy continued to work as a nurse.

In 1975, Betsy retired from nursing, and she returned to her native Islay. A year after their return, Fred tragically passed away, but – surrounded by family and community – Betsy settled into life in Port Wemyss where she was to live for the next forty years. A proud Gael, she had a great respect and interest in the landscape around her, and was – being from a long line of seafarers – a great lover of the sea. She would often go fishing in the summer in her rowing boat, particularly to catch saith, which she would then salt to be eaten at the New Year. At the age of ninety she sailed directly from Portnahaven across the Irish Sea to the Auld Lammas Fair at Ballycastle – a lifelong ambition of hers.

In her latter years she was always busy with something, whether it be baking, knitting, or gardening, and was at the heart of the local community. She was a regular contributor to Radio nan Gàidheal in her retirement, and in the recording of her featured on the Tobar an Dualchais website from 1998, she speaks to Coinneach MacÌomhair about the swimming pool in Bowmore, where she learned to swim in her eightieth year, and where she swam regularly at the time.

For further information about Betsy, a website, containing her photographic collection and family papers can be accessed here.