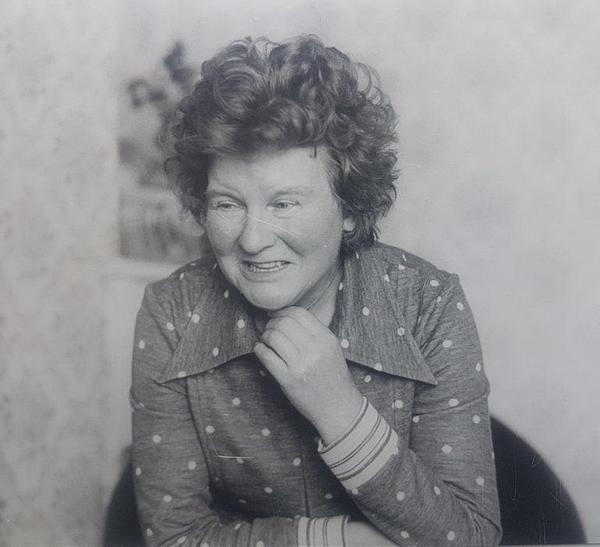 Betsy Whyte, born Betsy Townsley, was a Scottish Traveller associated with the area around Brechin and Montrose in Angus, who became best known through her autobiography, 'Yellow on the Broom', published in 1979. The book captured the public's imagination with its illustration of growing up as a Traveller girl in Perthshire and Angus between the First and Second World Wars. It was arguably the first popular account of the Traveller experience, a part of Scottish society which had often been omitted from the historical record.

Born in Old Rattray, next to the River Ericht at Blairgowrie, Betsy was an accomplished singer and storyteller, and could also turn her hand to the pipes, which she learned from her father. Betsy travelled with her family only in the summer months, allowing her to attend the required number of schooldays over the winter. She would go on to win a scholarship to Brechin High School, where she was the sole Traveller pupil, and the difficulties she encountered in this situation are recounted in her books.

In 1939, Betsy married Bryce Whyte, a fellow Traveller from a musical family, although Bryce was soon called into service during the war with the Seaforth Highlanders. He was invalided out of the army in 1943 and they settled in the fishing village of Usan, by Montrose, later moving to Ferryden, and then into Montrose town. The Whytes came to the attention of the School of Scottish Studies via Belle Stewart of Blairgowrie, and in 'Tocher', Linda Williamson recounts her visit to Montrose with Peter Cooke to try to locate the family.

Betsy was recorded by many different fieldworkers from the School between 1973-1988. In addition to Peter Cooke and Linda Williamson, other collectors include Barbara McDermitt, Alan J. Bruford, Alison McMorland, John D. Niles, Fred Kent, Margaret Bennett, and Emily Lyle. Such a wide range of collectors can demonstrate the level of interest in a particular contributor, and in Betsy's case, this reflects her wide range as a tradition bearer. Almost 300 separate tracks cover a range of songs, traditional tales, custom and belief, Traveller Cant, the supernatural, riddles and biography. A considerable number of recordings were made in Bryce's company, himself a gifted singer and musician.

In folklore scholarship, Betsy is often better known as a storyteller. Alan Bruford wrote that Betsy, "[did] not consider herself a singer in the same way as her husband's family, who are known for their good voices," although any objective listener would consider her a skilful singer, albeit with a gentler style than some contemporary Traveller singers. Betsy's song repertoire is somewhat fragmented, with sometimes incomplete versions of major ballads such as 'Jimmy Bracklaw' (The Baron of Brackley, Child 203), although two of her ballad renditions, 'The Twa Sisters' (Child 10) and 'Young Johnston' (Child 88) were considered significant enough to warrant inclusion on 'The Muckle Sangs' LP released in 1975. Betsy also sang a handful of Gaelic songs learned through her mother although she was not literate in the language herself.

The Scots Magazine called Betsy's autobiography, Yellow on the Broom, "a minor classic", and she became something of a celebrity, appearing on radio and television, as well as at folk festivals, schools, and giving talks to students at the School of Scottish Studies. Nevertheless, she continued to undertake work typical of Travellers, such as helping farmers at harvest time, berry picking, willow basket making and collecting whelks on the coast at Montrose.

The title of her first book was immortalised in Adam McNaughtan's iconic song which has since taken on a life of its own in the folk singing scene, and, poignantly, it was also the final song Betsy sang, the night before she died during the Auchtermuchty Folk Festival in August 1988. The second part of Betsy's story, 'Red Rowans and Wild Honey', was published posthumously in 1990, with later editions including a third instalment from her unfinished manuscripts, which she was working on when she died.

In 1989, Yellow on the Broom was dramatised by Anne Downie, with new touring performances by Dundee Rep in 2018. For the centenary of Betsy's birth in November 2019, her great-grandson published the children's book 'Wee Bessie' through the Heart of the Travellers organisation (HOTT).

McNaughtan, Adam, 'The Yellow on the Broom', in Sangstories – Stories of Scottish Songs, ed. by Linda McVicar, https://sangstories.webs.com/yellowonthebroom.htm [accessed Dec 2020]

Whyte, Betsy, The Yellow on the Broom: The Early Days of a Traveller Woman (Edinburgh: W. and R. Chambers, 1979)