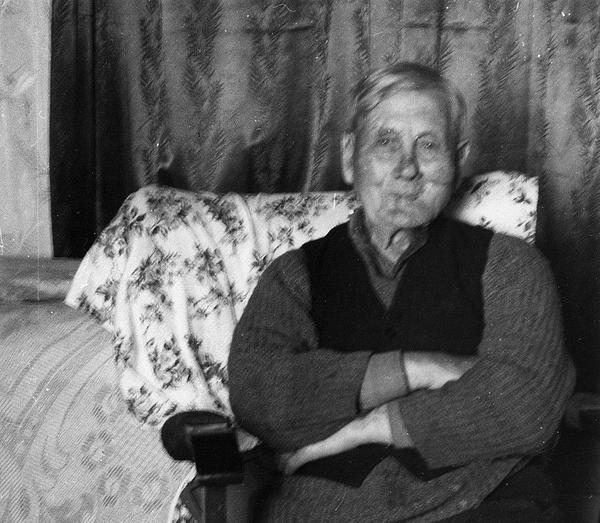 Donald Sinclair (Dòmhnall Chaluim Bàin) is widely regarded as one of Scotland's greatest tradition-bearers of the twentieth century. With almost 1,500 recordings of him on the Tobar an Dualchais website, his recordings are a vivid testimony of life in the islands in the late 19th and 20th centuries and leave us a precious legacy of Gaelic oral tradition for generations to come.

Born in the township of Balephuil in Tiree on 6 August 1885, Donald Sinclair was the youngest child of Malcolm Sinclair and Christina McArthur. His father, a tailor and fisherman to trade, was a well-known tradition bearer, the folklorist the Rev. John Gregorson Campbell having recorded many of his stories and poems earlier in the 19th century. While growing up, Donald learned much of his father's material, including stories from the Ulster Cycle featuring the legendary warrior Cuchullin, which he shared with Eric R. Cregeen when he was recording for the School of Scottish Studies in the 1970s.

Donald grew up in a strong Gaelic-speaking community, where a sharp tongue and quick wit were prized qualities. At one time there were over a dozen bards living in Balephuil and as a result it had been known locally as 'Baile nam Bàrd' (Township of the Poets). Donald describes in a recording from 1969 how these poets used to gather in one house and entertain each other by exchanging lampooning verses. Donald himself came from a long line of bards and he composed poems, mainly satires on local people, but didn't want them to be recorded. In this recording he talks about the Cliar Sheanachain, who were poets who took their fill from the tables of noblemen until a person could be found who could match their wit and intelligence.

Donald went to Heylipol School where he was taught in English. After leaving at the age of fourteen, he worked for the MacNeills who had a farm in Greenhill. They also had a library of Gaelic books to which Donald had access, and it was with the help of these books that he first began to read and write in Gaelic. Following his spell on the farm, Donald then started work in the quarries at Balphetrish and Ruaig producing road stone. He worked on building the pier at Scarinish from 1910-14 before joining the Royal Navy at the start of the First World War, where he served in the West Indies, the North Atlantic, and the Adriatic.

On Donald's return from the Navy, he worked as a shoemaker and crofter. He inherited a croft in West Hynish and lived there until his later years, after which he moved in with his nephew and his wife. Donald had an excellent memory and the breadth of his knowledge of local family history was outstanding. In this recording he talks about a blacksmith called Neil MacDonald who was living in Balephuil at the time of the 1851 census.

Donald was first recorded by the School of Scottish Studies in 1953, when Calum Iain Maclean visited him, and although Donald was under the weather at the time, he left a great impression on Calum. Hamish Henderson recorded him in 1958 and Dr John MacInnes made recordings of Donald throughout the 1960s. Fellow fieldworker Eric Cregeen visited Donald on many occasions between 1968 and 1974 and his style of storytelling would often leave Eric spellbound: "When [Donald] was telling of the great storm [in July 1856], you were there on the shore watching the boats founder, and felt the terror and pity of it. Then the melancholy would go from his voice, and his face would light up and his eyes shine as he recounted some wild escapade of one of his ancestors. The width of his sympathies and the rich complexity of his nature were part of his greatness as a seanchaidh [tradition-bearer]."