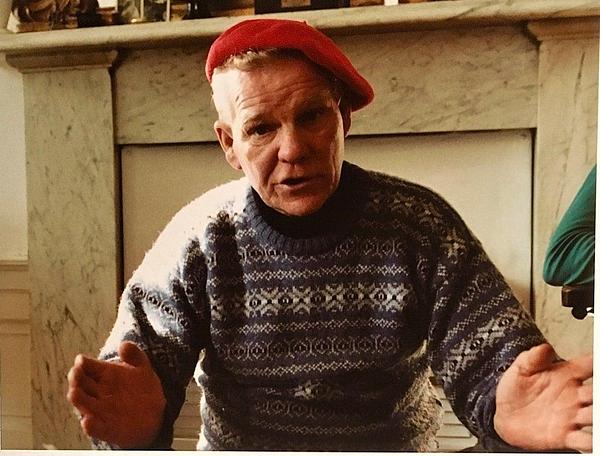 The Scottish Traveller Duncan Williamson is widely regarded as one of Scotland's greatest traditional bearers. Although primarily known for his vast store of traditional tales and for his dynamic storytelling, Duncan also had a significant repertoire of songs, tunes and Traveller lore, and was a skilled Jew's harp and harmonica player. After gaining wider attention during the folk revival, Duncan's recognition increased greatly through his collaboration with his second wife Linda, with whom he published many collections of traditional stories.

In this recording, Duncan tells that he was born in a tent on the shores of Loch Fyne in Argyll in 1928, one of sixteen children. His parents could not read or write but wanted Duncan to get a good education, so he attended school in Furnace, Argyll, from age five to fourteen, during which time he won dux medals for bible studies, poetry and Scottish history. It was also during his school life that Duncan's storytelling developed in earnest. Aged seven, he told the younger school children the story of the Fox and the Crow, which proved such a great success that he carried on performing tales he had heard from his parents and grandparents, including Brer Rabbit stories.

Upon leaving school, he took up an apprenticeship with Neil McCallum, a stonemason and drystane-dyker, who taught him many stories including some with Gaelic vocabulary and phrases. Duncan then travelled around Argyll and Perthshire, working on farms and as a horse dealer amongst other things. Duncan expanded his repertoire while working across much of Scotland, and would actively collect material from other Travellers, sometimes recording them on reel-to-reel tape, and always seeking out opportunities to hone his own versions of tales and songs.

The poet and folklorist Helen Fullerton, having recorded Duncan's sisters and his mother in the 1950s, became a firm friend of Duncan's, and in 1967 introduced him to the singer Geordie McIntyre; Geordie would go on to record Duncan singing fourteen songs, all of which can be found on this site. While most of these songs are fragments rather than full versions, they include excerpts of classic ballads such as Tam Lin, Child ballad no. 39. David Campbell notes that 1967 was the first time Duncan was invited to sing at the Folk and Ballad Club in Glasgow, and he was soon invited to the iconic Blairgowrie and Kinross Folk Festivals, organised by the Traditional Music and Song Association (TMSA). Duncan can be heard singing My Laddie's Bedside at the 1971 Kinross event, recorded by James Porter.

Duncan married his first wife, Jeannie Townsley (a distant cousin) in 1949, and they had seven children together. The marriage grew strained, however, as demand for Duncan's performances grew and he spent more time away from home. Jeannie would eventually become ill with heart problems, and would pass away tragically young in 1971, aged only 39. Following her death, Duncan and Jeannie's younger children were adopted by relatives while their three oldest sons were raised by Duncan.

In 1973, the American folklorist Linda Headlee moved to Edinburgh and took a course at the School of Scottish Studies. She would go on to record Betsy Whyte with Peter Cooke, and in the mid 1970s she visited Duncan as a source for her fieldwork. Within a short time, the two had fallen in love, and she and Duncan were married in Cupar in February 1977, witnessed by Hamish Henderson. The couple had two children, Betsy and Tommy, and lived in a tent for four years before moving to a cottage in Fife. Much of the story of Linda and Duncan's life together is covered in the two-volume biography, 'A Traveller in Two Worlds', written by former BBC producer David Campbell, and based on his longstanding friendship and hours of recordings with Duncan since meeting him in 1987. David is now an acclaimed storyteller in his own right, having learned much of his craft from Duncan Williamson.

In the 1980s, encouraged by Hamish Henderson, and with Linda's drive and transcribing expertise, numerous books were published of Duncan's stories, including 'Fireside Tales of the Traveller Children' (1983), 'The Broonie, Silkies and Fairies' (1985), 'The Genie and the Fisherman' (1991), and 'The King and the Lamp' (2000). These raised Duncan's profile further, and he was in high demand as a performer, attending folk festivals across the globe, and visiting countless schools across Scotland, raising the status of storytelling in Scottish society. Ultimately Duncan and Linda's marriage foundered in the 1990s, owing in part to the demands and pressures of keeping the mercurial Duncan and his career going, as the family received an "endless stream of visitors." However, Linda and Duncan continued to work together, and in 1994, Canongate published his autobiography, 'The Horsieman: Memories of a Traveller 1928–1958', based on many hours of recordings made by Linda over their years together.

Duncan sadly died of a stroke aged 79 in 2007 and was buried in Strathmiglo, Fife. The Scottish Storytelling Centre in Edinburgh's Royal Mile "grew from the seed planted by Duncan and Linda Williamson's work, the agency of 'Traditional Storytellers' serving schools throughout Scotland", and he is commemorated there in the form of the Duncan Williamson Chair, commissioned from the workshop of furniture maker Tim Stead. It was unveiled by Linda and Jimmy Williamson during a week-long celebration of his life in August 2008. In Duncan and Linda's 1986 book, 'A Thorn in the King's Foot: Folktales of the Scottish Travelling People', Hamish Henderson described Duncan as "possibly the most extraordinary tradition-bearer of the whole Traveller tribe".

There are over 200 tracks of Duncan on the Tobar an Dualchais website, of which over 80 are song-related. Of the traditional tales, many are extended tellings over several tracks, such as Jack and the Singing Leaves, spanning over 35 minutes. A good example of a shorter tale by Duncan is The Happy Man's Shirt, in which a king's melancholy could be cured by wearing the shirt of a happy man; in the end it is cured by jovial tramp who did not have a shirt, only a coat, but he made the king laugh.