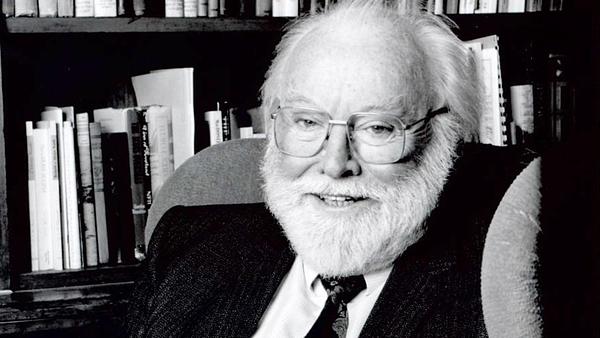 In the Tobar an Dualchais collection we are privileged to have both collections of academic fieldwork and broadcasting from throughout the 20th century. One of the rare characters who played an important role in both is Fred Macaulay of Sollas, North Uist. A veteran of the Second World War, he dedicated his life to the Gaelic community, travelling the country to record Gaels in every corner of the Highlands and Islands and championing the cause of regular Gaelic broadcasting in the hallowed halls of the BBC. His recordings on Tobar an Dualchais are testament to the long struggle for the recognition of the Gaelic community's needs in the world of media and politics.

Fred Ewen Gillies Macaulay, or Freadaidh Dhòmhnaill Bhàin, was born on New Year's Day 1925 in North Uist into a community where Gaelic was the language of everyday life. He received his initial schooling on the island, before moving to the mainland in order to – as was custom in those days – complete his education at Inverness Royal Academy. After finishing school he joined the war effort, serving with the Cameron Highlanders as an officer on the border between Italy and what is now Slovenia (formerly Yugoslavia), his duties including being part of a team who guarded Nazi SS personnel, as well as Ukrainian prisoners of war.

On his return to Scotland in 1945 at the age of twenty, he decided to enrol at the University of Edinburgh. After graduating with an MA in Celtic Studies, Macaulay then joined the department as a member of staff, teaching Gaelic under Professor Kenneth H. Jackson. It was an exciting time for Gaelic at the University, with the School of Scottish Studies being founded in the early 1950s and the Gaelic Linguistic Survey being carried out from 1950 onwards. Having studied phonetics while he was teaching Gaelic, Macaulay was put to work on the Gaelic Linguistic survey, recording Gaelic dialects across Scotland, in places such as Arran, the Trossachs, and Perthshire, when the local dialects of Gaelic were on the verge of extinction.

In 1954, Fred Macaulay started his first post in broadcasting, as one of the four members of staff at the BBC Gaelic Department at Queen Margaret Drive, Glasgow. Macaulay was not short of ambition nor drive and began to modernise the Gaelic radio content of the time, famously bringing together the singer Flora MacNeil (Flòraidh Sheumais Mhurchaidh) of Barra with the BBC Scottish Orchestra for an on-air concert in the 1950s. He also had vision of future expansion, embracing modern one-person tape recorders, which made recording on the go significantly easier. Macaulay first used this technology to interview survivors of the Iolaire disaster of 1919.

Fred Macaulay succeeded Hugh MacPhee as head of the BBC Gaelic Department in 1964, winning extra producer and secretary posts as part of the bargain. Throughout his ten-year tenure, he expanded the range of Gaelic programming, sourcing young production talent, producing light entertainment programmes such as 'S e Ur Beatha, and developing current affairs programming in Gaelic. By the 1970s, however, the BBC wanted to move the Gaelic department out of Glasgow. Macaulay disagreed, and weathered attempts to remove him from post.

In 1976, Macaulay joined the new bilingual station BBC Radio Highland (Radio na Gàidhealtachd) in Inverness as station manager, where he remained until his retirement in 1984. Macaulay leaves the tangible legacy of the strong foundation of modern Gaelic broadcasting. Without his determination and drive, it is likely that the two cornerstones of Gaelic media – BBC ALBA and BBC Radio nan Gàidheal – would not exist. He also leaves as a legacy an edited collection of the poems of Dòmhnall Ruadh Chorùna, and various other publications under the pseudonym of Eoghan Gilios.

As of February 2021, there are around 200 tracks featuring Fred Macaulay on the Tobar an Dualchais website. There is a considerable amount of material from Harris and Scalpay, as well as material from the Royal National Mods in the 1940s and 1950s. Notable contributors include Margaret MacKay (Mairead Dhonnchaidh Chaluim 'ic Aoidh) (1872-1963), originally of Scarp and later North Harris; Mrs Belle Anne MacAngus of Hilton, Easter Ross, one of the last native Gaelic speakers from the area; Margaret MacLennan (Mairead Dhòmhnaill 'ic Aonghais) of Scalpay; and Norman Morrison (Tormod Eòghainn Chaluim) (1921-1995) of Ardanashaig, Scalpay.