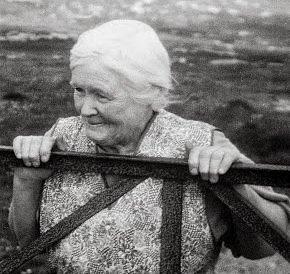 Kate (Ceit) MacDonald (Bean Eairdsidh Raghnaill) is one of the most celebrated Gaelic tradition bearers of the 20th century, having long been lauded for her rich repertoire of Gaelic song. Raised in a South Uist family which was steeped in the Gaelic oral tradition, she had an astonishing memory for Gaelic songs, and the recordings of her carried out by the School of Scottish Studies are among the finest examples of Gaelic song on the Tobar an Dualchais website.

Born in Garryhallie, South Uist, Kate was the first of three children born to Neil and Marion Campbell, and she was immersed in Gaelic song, piping and storytelling from a young age. Her mother Marion Campbell (Mòr nighean Aonghais 'ic Eachainn) (1868-1971) was a MacLellan from Loch Aoineart and a highly-respected tradition bearer, known for her thorough knowledge of Gaelic song lyrics. Her father, Neil Campbell, was a renowned piper, and her maternal uncle was none other than Angus MacLellan (Aonghas Beag mac Aonghais 'ic Eachainn) (1869-1966), the renowned South Uist storyteller who received an MBE for his services to the preservation of Gaelic oral tradition.

Given her family background, it is no surprise that Kate inherited such an interest in Gaelic traditions and song, and was also given the gifts of a remarkable memory, combined with a fine singing voice. In this recording from 1953, Kate sings an unusual vocal dance tune entitled 'Sheatadh Cailleach, Ruidhleadh Cailleach'.

Kate attended school until the age of fourteen before – like so many other young women in the Highlands – going into domestic service. She spent two years in Barra at the home of the Pier Master in Castlebay, before returning to South Uist to work in Askernish House, and in a local hotel. In 1925 Kate married Archie MacDonald (Eairdsidh Raghnaill 'ic Ruairidh 'ic Raghnaill) of Garryhallie. They settled in Archie's native township, having seven children together. Archie was another fine exponent of the pipes and two of their children, Rona and Neil, inherited an excellent aptitude for the instrument, and just like the household in which Kate grew up, the MacDonald home was filled with music and song. Their legacy is continued today most notably by their daughter Rona Lightfoot, who is in her own right a renowned piper and singer, with many recordings of her also featuring on the Tobar an Dualchais website.

Hamish Henderson was the first person from the School of Scottish Studies to meet Kate while visiting the Western Isles, five years before the establishment of the School in 1951. She was first recorded by Polly Hitchcock from the School in 1951 and then by Calum Iain Maclean and his brother Alasdair in 1953. Other fieldworkers who made recordings of her included Donald Archie MacDonald, Alan Bruford, Peter Cooke, and Angus John MacDonald. In total, around 200 of her repertoire of songs were recorded from a wide range of genres, the most notable being her repertoire of waulking songs.

Although Kate was recorded singing many times, she always declined to talk about herself or to acknowledge her extraordinary talents. Paying tribute to Kate after her death in 1977, Donald Archie MacDonald commented that: "Even if she had never sung a song Kate MacDonald would still have been remarkable - for her humanity, her dignity, her sparkle, her ready wit and her infectious sense of fun. She was one of the most remarkable people I have known, and I cared for her greatly."