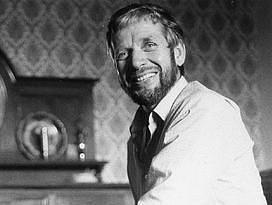 The late Dr Peter Cooke was one of Britain's leading ethnomusicologists and folk music researchers, with a long and productive career covering not only the music of Scotland, but also of eastern Africa.

Peter Rich Cooke was born into a musical family in Cardiff in 1930, the fourth of five brothers, all of whom would go on to sing as choristers in the local Catholic church. With encouragement from his parents and teachers, the young Peter began taking piano lessons and would go on to choose an education in music teaching, entering Cardiff University in 1949.

Upon graduation, Peter taught music in a number of secondary schools and thereafter began training teachers in musical instruction. An opportunity to carry on with this work in Uganda saw him leave the UK in 1964, and it was then that his interest in ethnomusicology and folk music took off in earnest, both through meeting experienced researchers on their own field trips to Africa, and in considering how he himself should incorporate an understanding of local music into his teaching.

Peter came to Scotland in 1968 to work at Moray House teacher training college in Edinburgh, pursuing a distance learning master's degree at the University of Wales at the same time. It was at this time that he came under the influence of Danish scholar Thorkild Knudsen (1925-2007), who was associate professor at the School of Scottish Studies (1963-69), with a remit for developing ethnomusicological practice and fieldwork. Peter accompanied Knudsen on fieldwork trips and learned a great deal from him in terms of philosophy and methodology. It was unsurprising then that Peter ended up taking over Knudsen's role at the School when the latter moved back to Denmark in 1969. Peter would go on to set up the UK chapter of the International Council for Folk Music in 1972 (later the British Forum for Ethnomusicology), inviting other prominent folklorists and ethnomusicologists to take part, and he served as its chairman in 1973-80 and again in 1988-90.

In his role as the lead music researcher at the School of Scottish Studies, Peter focussed on deploying the best available technology to record musicians and singers in Scotland – and indeed seeking out the best performers to record. Having identified geographical areas which had received comparatively little attention from researchers, he would as a result go on to do a great deal of work in Shetland. His fieldwork there from 1970-1980 would form the basis of his doctoral thesis on the Shetland fiddle tradition, which was published in book form in 1986, containing a full and in-depth description and analysis of local fiddlers and their repertoires. Such musicians included highly-regarded Cullivoe fiddler Bobby Jaimeson (1892-1977), an example of whose playing can be heard on this 1973 recording of Peter's.

Peter also devoted significant effort to the study of ceòl mòr/pìobaireachd – the classical music of the Highland bagpipe – looking especially at the issues of notation, technique and style. Particularly noteworthy among his contributors was George Moss of Strathglass (1903-1990), of whom Peter said: "During my 30 years of fieldwork amongst Scottish musicians I found George to be the most authoritative and knowledgeable piper I met." Good examples of George's skill are to be found on a number of Peter's fieldwork recordings from the early 1970s, such as this conversation on the construction and variations of pìobaireachd, and this performance of Chisholm's Salute.

George Moss was also the featured artist on a volume of the 'Scottish Tradition' series of commercial albums, a project initiated by Peter as a collaboration between the School of Scottish Studies and Tangent Records: "As a musician […], I was […] concerned that the best of a huge store of music recordings accumulating in the School's archives needed to be made publicly available and much of my time and energy, apart from teaching, went into working with colleagues to select and publish music itself rather than words about music." Peter acted as series editor for fifteen volumes between 1971 and 1989, and these were reissued on the Greentrax label in CD format in the 1990s, with additional volumes continuing to be added to this day.

The Travellers and their traditions were of particular interest to Peter, and the celebrated tradition bearer Betsy Whyte of Montrose (1919-1988) was chief among these. It was Peter who brought Betsy to the attention of the wider public and fellow researchers, including his student, Linda Williamson (b.1949). Betsy can be heard on this website singing her masterpiece, the classic ballad Young Johnstone, for Peter and Linda in 1974. It was also with Peter's editorial assistance that Betsy was able to publish her two autobiographical books, 'Yellow on the Broom' (1979) and 'Red Rowans and Wild Honey' (1990).

Peter took early retirement in 1989, although he remained at the University of Edinburgh as a Fellow for a further five years, carrying out research at a more relaxed pace. In 1994, upon Peter's decision to retire more permanently to the West Midlands, a special conference was held in his honour in Edinburgh, with participants reflecting on themes prominent in Peter's own fields of interest.

Settling in Sutton Coalfield, Peter remained very active in his local musical community, as well as maintaining the many relationships he had made in his long career. One of his last projects was the creation of a website (https://www.sssa.llc.ed.ac.uk/whalsay/about-whalsay/) dedicated to the song traditions of Whalsay, an island in the Shetland archipelago, featuring many of his own field recordings and photographs. Peter passed away in 2020 at the age of 90, and is survived by his wife and three sons.