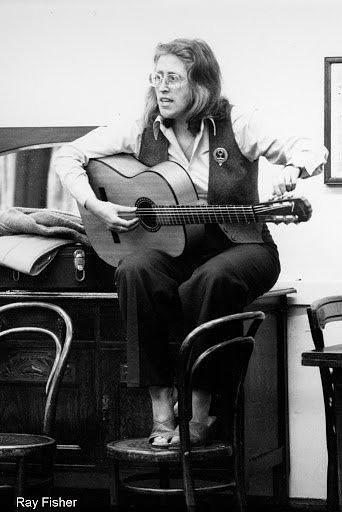 Ray Galbraith Fisher was a Scots singer born in Glasgow to a musical family of seven children, several of whom also became well-known singers in the Scottish folk revival. Their father John was a singer in the Glasgow Police Choir and their mother Marion a Gaelic speaker and singer who grew up in Barra and Vatersay.

Ray's singing career started in skiffle with brother Archie, and soon they had formed a group called The Wayfarers with fiddler Bobby Campbell, with a mixed American and Scottish repertoire. In the late 1950s, Ray began a folk club at Glasgow's Jordanhill teacher training college where, according to Smithsonian Folkways, she hosted performances from Pete Seeger, The Dubliners, and The Clancy Brothers.

Ray attended the famed Ballads Club at Rutherglen Academy run by Norman and Janey Buchan, both mainstays of the folk scene in Glasgow and active in the Labour movement. The Buchans introduced her to Traveller singer Jeannie Robertson. Archie Fisher recalled that Jeannie told Ray, "Ye're not pittin it oot right," after first hearing her sing, following which Ray spent six weeks in Aberdeen with Jeannie learning traditional song. Jeannie's influence can clearly be heard in Ray's version of The Bonnie Wee Lassie Who Never Said No, as well as her concentration on some of the classic ballads or 'muckle sangs'. As a result of this 'apprenticeship', Ray also became firm friends with Jeannie's daughter, Lizzie Higgins.

Ray and Archie released their first record, the four-song EP 'Far Over the Forth' in 1961, and the duo appeared regularly on television and radio, as well as the compilation recordings on the Waverley label in particular. This saw them appearing alongside the other network stars of the day at the height of the 1960s folk revival, The Corrie Folk Trio and Paddie Bell on 'The Hoot'nanny Show' anthologies, and The Dubliners on 'Folk Festival' (1964). In the early sixties, Ray also began appearing on field recordings for the School of Scottish Studies Archives by the fieldworker, journalist and record producer Arthur Argo.

Ray married pipemaker and performer Colin Ross of the Northumbrian group The High Level Ranters in 1962, having met him in a folk club. With her move to Tyneside, the duo work with Archie became less frequent. As a solo performer, however, Ray went on to become what some have called, "the voice of Scots song in England."

In 1966, 'The Fisher Family' featured six of the siblings performing a variety of songs for Topic Records, including already at that time, several songs by Ewan MacColl. Ray had been one of the featured singers on MacColl, Charles Parker and Peggy Seeger's Radio Ballads episode, 'On the Edge' in 1963.

Ray did not record prolifically as a solo artist, releasing only three albums under her own name: 'The Bonny Birdy' (1972), 'Willie's Lady' (1982), and 'Traditional Songs of Scotland' (1991). Two of the albums notably featured Martin Carthy on guitar, alongside other leading musicians from the English and Scottish folk scenes. Ray's singing appeared on a wide number of compilation albums, however. Ray also performed internationally, touring with Archie and sister Cilla to the United States, and recording her second album for Folk-Legacy Records of Connecticut (a label for which her siblings also recorded).

Often accompanying herself on nylon-strung guitar, Ray occasionally used the back of the guitar as a rhythmic instrument for work songs such as I Am A Miller Tae My Trade, which appears several times in the recordings here, a technique she says she learned from Lucy Stewart of Fetterangus.

Ray was a great supporter of emerging singers, perhaps reflecting her own experiences in learning from significant tradition bearers like Jeannie Robertson. In 2002, Ray was one of a host of singers featured in the 'Scottish Women' tour, which had a number of music students in the entourage as 'roadies', through the musical director Brian McNeill's role at the then RSAMD. Singer Fiona Hunter was a student then and recalls that Ray, "was very welcoming towards me and made me feel part of the tour. Sometimes she would just come and sit beside me and ask what songs I was learning." In 2008, the English Folk Dance and Song Association (EFDSS) awarded Ray its Gold Badge for services to traditional song, and in 2010 she was inaugurated into the Scottish Traditional Music Hall of Fame. Ray passed away in 2011 after a long illness.