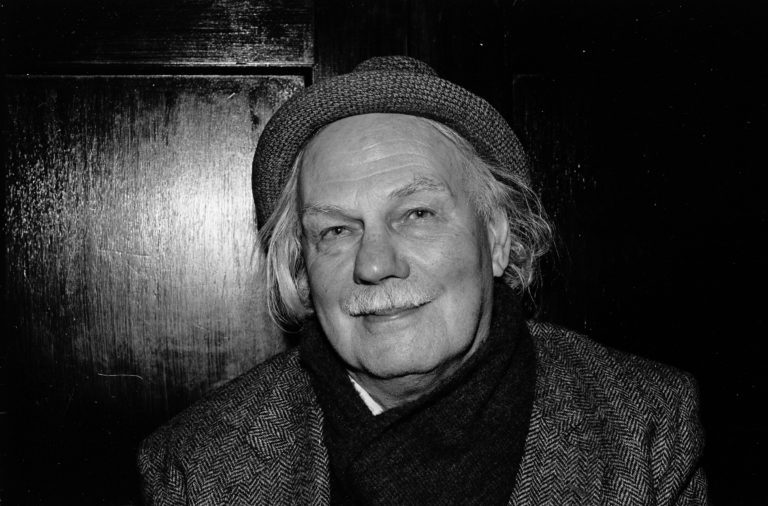 Hamish Scott Henderson is one of the most well-known and most prolific fieldworker-scholars to have contributed to the School of Scottish Studies sound archive, with a collecting career spanning over 40 years. Moreover, he is considered by many to be the 'father' of the Scottish folk revival due to his efforts to promote the folk traditions of Scotland through festivals, commercial recordings, and his active support for young people interested in learning from older generations of singers and storytellers.

Henderson's childhood in Perthshire was a contrast between his family's limited means and his experience of a rich cultural heritage of local songs and traditions, encounters with Travelling people, and a growing love for languages both Classical and modern. As a single parent, his mother was forced to move where work could be found; this eventually saw the pair end up in the south of England where his mother worked as a housekeeper. Tragedy was to strike with his mother's untimely death, and Henderson was taken under the wing of his kindly schoolmaster.

A gifted learner, he soon after won a scholarship to the prestigious Dulwich College in London, where he excelled in languages and the study of poetry and European literary traditions. A further scholarship brought him to Cambridge to study French and German, serving him well in his subsequent role as an intelligence officer in WWII. Throughout his wartime experience, Henderson would collect the songs and parodies of his fellow soldiers, publishing them after the war as the 'Ballads of World War II'. His experiences in the North African campaign would later be crystallised into his 'Elegies for the Dead in Cyrenaica', a much-lauded poetry sequence that would go on to win the Somerset Maugham Award in 1949.

It was Henderson's time in Italy however, as he participated in the liberation of the peninsula, that was to profoundly influence the course of his thought and future career as a folklorist. On discovering the writings of communist theorist and philosopher Antonio Gramsci, Henderson's views on politics and folklore synthesised into a lifelong perspective in which folk songs and stories became the 'voice of the people', a way for everyday and marginalised peoples to reflect on their circumstances, take inspiration and build resilience, and respond to and resist oppression and the challenges of life.

It was also in Italy in the late 1940s that Henderson discovered the newly invented Olivetti portable reel-to-reel tape recorder, which was immediately apparent to him as a means of accurately recording and reproducing the sound of folk performances. On returning to Scotland, he lobbied the University of Edinburgh to provide funding for him to travel to Aberdeenshire - often regarded as the heartland of Scottish balladry - in search of folk songs, and, importantly, to prove that the old traditions of singing and local song-making were still to be found, and were worth the effort to document. Henderson was granted a small stipend to begin his explorations and would go on to meet and record some of his most significant contributors in the North-East, including Jimmy MacBeath of Portsoy and Willie Mathieson of Ellon. These recordings, and Henderson's persistence, persuaded the University of the value of such work, and were among the key reasons for the establishment of the School of Scottish Studies in 1951.

Appointed to the School as one of its first fieldworkers, Henderson embarked on collecting songs and tales from all over Lowland Scotland, and to a lesser extent the Highlands, and writing academic and popular articles on his encounters and folk songs in general. Many of the best contributors, including Jeannie Robertson of Aberdeen, Flora MacNeil of Barra, and the aforementioned Jimmy MacBeath, were invited to perform in Edinburgh at the Peoples' Festival Ceilidhs (1951-54) organised by Henderson, an annual feature of the Peoples' Festival which was set up in response to the perceived elitism of the official Edinburgh Festival. Henderson also acted as a guide to American ethnomusicologist Alan Lomax when the latter came to Britain to make his own recordings in the early 1950s.

The next two decades saw Henderson collect a vast store of bothy ballads, Scots classic ballads, street songs, broadside ballads, and other songs and tales, as well as establish a large network of contributors, many of whom would become his lifelong friends. Among his most significant achievements was the building of solid ground between academia and the Travelling people of Scotland, for centuries a marginalised and often harassed group. Henderson's patience and manner forged great friendships with such celebrated Traveller tradition-bearers as the great ballad singer Jeannie Robertson of Aberdeen, and the Stewart families of Fetterangus and Blairgowrie.

These recordings and relationships would become enormously influential in the newly emerging Folk Revival - a popular societal re-engagement with folk traditions - in which young people would learn songs and stories from the kind of 'source singers' sought out by Henderson, either directly, or via the recordings contained in the School of Scottish Studies. Likewise, when the School later began offering postgraduate courses in folklore and ethnology, Henderson's students benefited from his extensive collecting, and indeed from his tutelage 'in the field', where they would accompany him on trips to meet tradition-bearers. Among the young people directly influenced in this way were Jean Redpath, Andy Hunter, Alison McMorland, Stephanie Smith, and many others.

Henderson's own poetry and song-making continued sporadically throughout his career, though his 'Freedom Come-All-Ye', composed for the anti-nuclear CND movement in 1960, became an anthem for social justice among folk revival singers and other movements, and is today regarded by some as an unofficial national anthem.

Many excellent retrospectives followed Henderson's official retirement from the School in 1987, including the documentary film 'Journey to a Kingdom – Hamish Henderson returns to the North East of Scotland' (1992), directed by Henderson's artist friend Timothy Neat, and selected writings (1992) and letters (1996) edited by Alec Finlay. Following Henderson's death in 2002, the interest in his life and career only continued to grow, and subsequent years saw the production of a major two-volume biography by Timothy Neat, four collections of essays on Henderson's work in folk culture, edited by Eberhard 'Paddy' Bort, and more recently two works by Corey Gibson focusing on Henderson's cultural and political influence, and his collected poems and songs respectively. Henderson's own papers (minus some letters which he himself sold to the National Library of Scotland in his later years) can be found in the Centre for Research Collections at the Main Library of the University of Edinburgh.

It is difficult to overstate the lasting influence of Hamish Henderson on a wide variety of people in the cultural life of Scotland and beyond, and his recordings in Tobar an Dualchais / Kist o Riches are one of the most important parts of his enduring legacy.