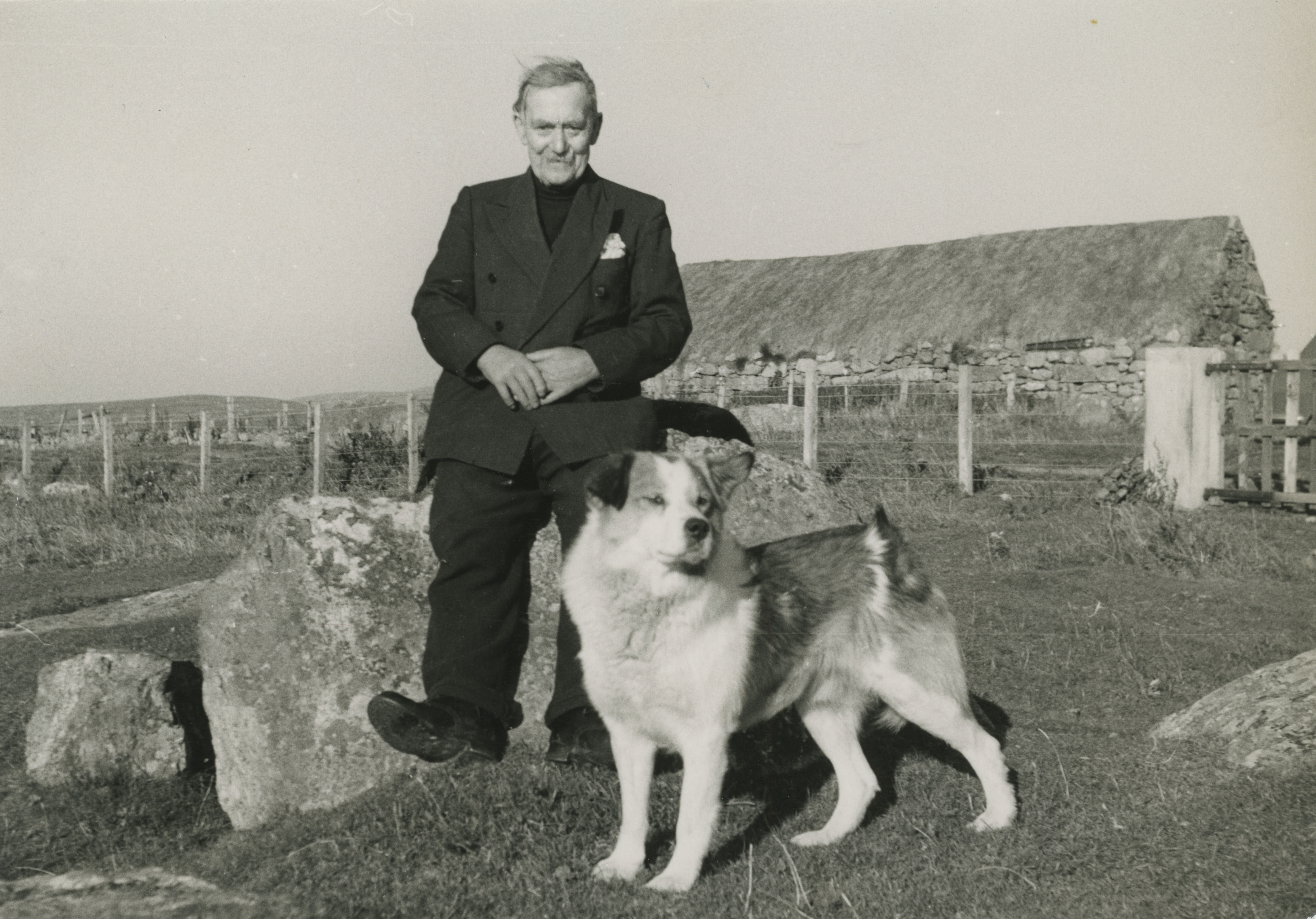 In the years following the end of the Second World War in Scotland, it was becoming increasingly apparent that the Gaelic culture and language were under severe threat. An increasingly globalised and English-dominant world combined with economic hardship in Highland communities meant that the Carrying Stream on which folklore traditionally flowed between generations was weakening, and the recording of traditional song and story was more urgent than ever.

Much of the initial efforts of the early fieldworkers were focussed on Uist and Barra, and much of the important fieldwork recorded in this period is available on the Tobar an Dualchais website. The tradition bearer Angus MacLellan (Aonghas Beag mac Aonghais 'ic Eachainn 'ic Dhòmhnaill) is among some of the most prominent and memorable contributors on the Tobar an Dualchais website, and was recorded by both John Lorne Campbell and Calum Maclean of the School of Scottish Studies in the 1940s and 1950s. His storytelling was well known in the community, and he is widely acknowledged to be one of the last Scottish Gaels on record capable of reciting the epic tales both from the Finn and Ulster Cycles, tales which can be traced back almost a thousand years to medieval Irish manuscripts.

Born in the middle of the 19th century, MacLellan was born into a community which had been ravaged by persecution, famine, and clearance, but which still held onto a rich oral tradition. He was born on 4 July 1869 at Poll Torrain, Loch Aoineart. His father was Angus MacLellan, a landless cottar who himself belonged to Loch Aoineart, and his mother was Catherine Wilson, of Benbecula. The estate reorganisation led by Colonel John Gordon of Cluny and his factors twenty years previously had left many without land, and Angus' father was required to scrape a living by paying to work on land owned by other people. As a result, Angus grew up in severe poverty, with little security or opportunity. He received two years of formal schooling in English, but stopped at the tender age of seven years following a spell of ill health.

After spending his formative years in Uist, he left the island in 1889 to join the Second Battalion of the Queen's Own Cameron Highlanders, taking part in a training camp in the summer of that year. His time with the Battalion was short-lived, and after the camp disbanded, he engaged to work on farms on the mainland as a labourer and ploughman, first at Tirnie Farm in Perthshire, then at Borenich on Loch Tummel-side, Rowardennan at Loch Lomond, and finally at Dalmally in Glenorchy.

In 1900 MacLellan returned to Uist, where conditions had improved following the Crofters' Act of 1886, his father receiving a croft from the Congested Districts Board. He helped his father with the croft, and started working with two other local men to help make ends meet. In 1907, he and his family received a croft on the land which was formerly Ormaclete Farm along with eight other landless families from Loch Aoineart, where Angus stayed until a couple of years after the death of his parents, soon after which he moved to Frobost, remaining there for the rest of his life.

Angus MacLellan was well known in South Uist for three things – his expert skills with sheep, with horses, and his storytelling. His storytelling ability, which he also shared with his sister Marion Campbell (Bean Nìll), was lauded by the many scholars who visited him, and he could remember simple tales by hearing them once, and longer, more complex tales after hearing them three times. He was known to have a unique talent for dramatizing his characters:

"Aonghus Beag possesses to an uncommon degree the power of reproducing the conversation of his characters, and of carrying his voice to imitate their tone, whether it be of an angry general, a disagreeable crone, a self-pitying drunkard, or the despairing mother on whom the fairies have inflicted a changeling for her own infant. He is also an expert in the art of giving a spoken story form and climax." – John Lorne Campbell (1960), 'Stories from South Uist', p. x.

MacLellan was recorded extensively from the 1940s onwards by John Lorne Campbell, Calum Maclean, and Donald Archie MacDonald, and Tobar an Dualchais is privileged to have more than 400 tracks featuring Angus MacLellan available online. These cover a vast range of material, from personal stories from his boyhood, and his time on the mainland, to stories about Cù Chulainn, the Fenians, and about the supernatural. He leaves behind precious legacy of material which reminds us not only of the extreme poverty and oppression in 19th-century Uist, but also of the resilience and endurance of a rich oral culture which weathered hundreds of years of attempts to dismiss and destroy it.

MacLellan, Angus (1962), The Furrow Behind Me: The Autobiography of a Hebridean Crofter, trans. by John Lorne Campbell (London: The Country Book Club, 1963)