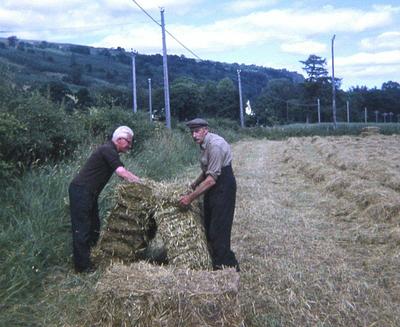 A traditional crossing point of Highland and Lowland culture in Scotland, the county of Perthshire has always been a fascinating place for those interested in Scottish culture. At Tobar an Dualchais, we are delighted to have recently uploaded to our website a selection of newly-added contributors from Perthshire from the archives of both the School of Scottish Studies and the BBC. This follows a focussed campaign in the local communities, particularly in the Highland Perthshire area. The new contributors are as follows:

Born Alexandra Mary Stewart in 1896, Alexandra – also known as Lexy – was a native of Glen Lyon, spending her first three decades in Woodend, before moving to Aberfeldy in the late 1920s. Her father, Alexander Stewart, was a local historian and author, and his daughter followed in his footsteps writing two books entitled ‘The Glen that Was’ and ‘The Daughters of the Glen’.

Alexandra was recorded by Anne Ross of the School of Scottish Studies in the 1960s, speaking about a variety of subjects from Perthshire Gaelic and local history to stories of the supernatural.

A Gaelic singer from Fortingall, Cathie Fraser performed regularly in Perthshire and futher afield. She won the Silver Pendant in 1959 at the National Mod in Dundee, and was recorded singing by Maurice Fleming of the School of Scottish Studies at the Dundee Civic Week Ceilidh in 1961.

Carol Phillips (1961-1995) was a Gaelic singer from Dunning, Perthshire. Winner of the Silver Pedant in Lochaber in 1981, she was recorded singing ‘Miann an Eilthirich’ and ‘Mo Chridhe Trom ’s Duilich Leam’ by the BBC in the same year.

Anne Bennett (née Phillips) – the sister of Carol – was the winner of the Nova Scotia Gold Medal at the 1975 National Mod in East Kilbride. Her recordings now on Tobar an Dualchais include performances from both the 1975 and 1976 National Mods, which were recorded by the BBC.

Hamish Robertson is a former missionary and lecturer from Perthshire. He can be heard on the Tobar an Dualchais website contributing to ‘Prògram Choinnich’, Kenneth MacIver’s programme on BBC Radio nan Gàidheal, commenting on South Korean affairs and on Perthshire history.

Duncan MacGregor (1896-1980) was a wheelwright and joiner from Balnald, Glen Lyon. He came from a long line of cartwrights and wheelwrights, and was recorded by Anne Ross of the School of Scottish Studies in April 1965, speaking about the history of his local area as well as his own family history.

Janet, Isabella, and John Marshall were siblings who hailed from Glackmore, Killiecrankie with ancestral connections to Glen Tilt. They were recorded in 1965 by W F H Nicolaisen of the School of Scottish Studies speaking about local placenames.

Donald ‘Hilltops’ MacMaster (1879 – 1959) of Kinloch Rannoch was a Piper in the Black Watch and veteran of both the Boer War and the First World War. He was recorded by Calum Iain Maclean of the School of Scottish Studies in 1958 speaking about the history of piping in the Loch Rannoch area.

William S MacDonald (1930 – 1984) was a Gaelic singer with a strong connection to Perthshire. Born and brought up in Larbert, Stirlingshire, he came – via the Isle of Skye - to Perthshire as a sixteen year old, where he worked for thirteen years as a shepherd in Killin, before moving to Callander where he spent the rest of his life.

He won the Gold Medal it the National Mod in Aberdeen 1976, and his winning songs - courtesy of the BBC - can now be heard on the Tobar an Dualchais website.

William Allan (1911-1999) was born in Falkirk and raised in Killin, Perthshire. He was recorded singing by Anne Ross of the School of Scottish Studies in 1964, and later by Margaret Bennett - also of the School -, at the Annual Balquhidder Ceilidh in 1988.