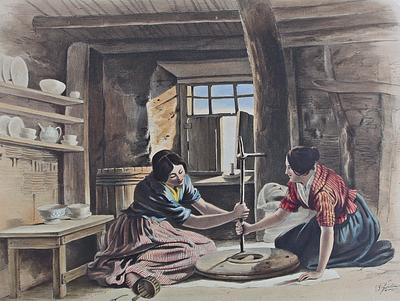 This article, first published in the West Highland Free Press in November 2019 was written by Hugh Cheape.

A line from a Skye song, Cuir an car deiseal am feasda den bhràth, should remind us that moving or circulating ourselves or things must be done clockwise and following the sun. The right action is recommended in the proverb Deiseal air gach nì or ‘Sunwise with everything’. In our case here, the advice relates to setting the ancient hand mill or quern to work, and the song was sung as you worked.

Singing to accompany work, and to ease the burden as it were, has been a worldwide custom. This began to be studied in 19th century Europe and collectors noted down songs and music. They rarely noted work songs such as the Òrain Luaidh or ‘Waulking songs’ but, as time has shown, these were recognised as one of the jewels in the crown of the traditions of the Highlands and Hebrides. In the Gaelic world (as elsewhere), singing extended to a range of other work tasks and communal activities such as rowing songs and reaping songs for harvest-time, besides the work of ‘fulling’ or shrinking the woven cloth that had come off the loom.

As work patterns and needs have changed, the handloom more or less disappeared in the 20th century and with it, the hard, physical work of hand-finishing the cloth. And then the songs too were in danger of disappearing had they not been recorded in the three scholarly books of Hebridean Folksongs (1969-1981) by John Lorne Campbell and Francis Collinson. Most of the 135 songs had been recorded on wire and tape and are now available in the wealth of song and story in Tobar an Dualchais.

The Òran Luaidh with their single line or couplet structure and a chorus of words or ‘vocables’ such as ‘Hò ro hù ò, hò ill eò’, were sung by the working group, in this case of women, with one woman leading the singing. Other work songs belonged to other spheres of work with individual tasks such as milking and churning the milk for butter. Grinding grain for meal was more often done by two people sitting on either side of the hand-mill or quern, another physically demanding task which could be sustained with song.

The quern consisted of two discs of stone, about 2 inches thick and between about 16 or 24 inches in diameter, expertly quarried from veins of hard, gritty schist-type of rock. The lower stone would sit on the ground and the upper stone was carried on an axle or ‘spindle’ fixed in the centre of the lower stone and was moved round by a wooden handle set towards the outer edge of the stone. As the upper stone was moved round by the worker’s hand, grain was fed in handfuls into the central hole or ‘eye’ of the quern and moved out between the stones to drop out of the periphery as fine meal. The quern sat on a skin in order to keep the meal clean and make it easier to gather up when the work was done. In one Tobar an Dualchais recording Donald Alasdair Johnstone (born 1889) from South Uist provides a description of the quern being used in his home as a child. The quern was placed in the middle of the floor by the fire [TAD ID 10532]. 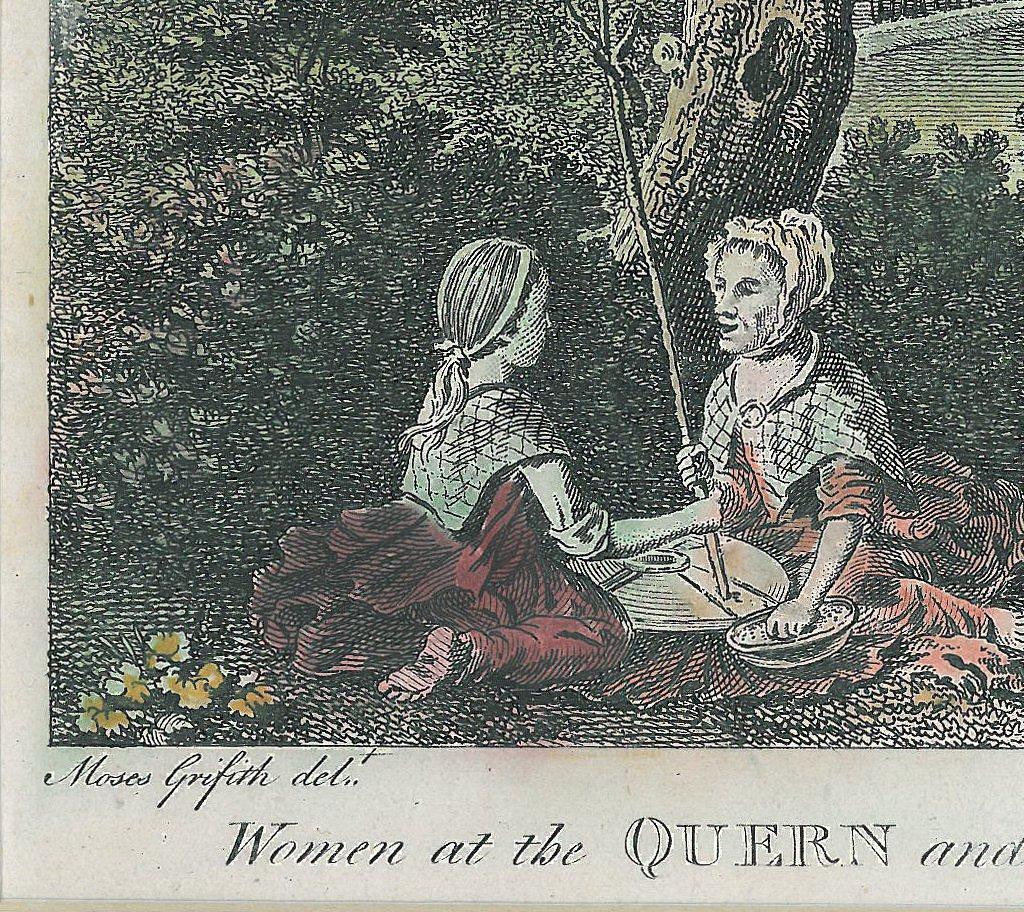 The quern or hand mill is a simple artefact of huge significance. It happens to be one of the most prolific pieces of Scotland’s ‘material culture’, surviving from the Neolithic and Iron Age into the 20th century. It was an early step in a process of the mechanisation of food production by which large millstones came to be driven by water wheels and windmills. Rather than grind their grain in the house with the quern, the people were bound to take their grain to the landlord’s mill but the landlord and miller took a levy or proportion of the meal ground. This was a harsh burden where agriculture was small-scale or families were a long way from the mill.

There are many stories in the Islands of landlords enforcing the use of the mill by sending their factors to destroy the querns, thereby depriving the people of the means of preparing meal at home or as needs arose. Loch Leum nam Brà (‘The Loch of the Dashing of the Querns’) on the road to Staffin recalls the throwing out of the querns by Lord Macdonald’s factor. Another account, by Angus MacLellan in South Uist (born in 1869), carries the same note:

We weren’t sending anything to the mill. We had a quern ourselves and we were making do with our own grain. .... Then the regulation was made by the proprietors that everyone who owned a quern must have it broken. It was then that the Ground Officers began to go through the houses breaking the querns, and the querns were thrown into a loch down at Ormiclate beside the main road. That loch has never been called anything since but ‘Loch nam Bràithntean’, ‘The Loch of the Querns’. [TAD ID 98190]

Songs sung while working with the quern have a long pedigree in the islands if we are to believe that the ‘first quern song’ was sung by Calum Cille (or St Columba) in his monastery in Iona in the 6th century. He was preparing food for some travellers and sang as he put the grain through his quern, and his song was the Latin hymn, Altus Prositur. So if Calum Cille sang as he worked in the 6th century, we can be sure that generations before history sang as they worked. 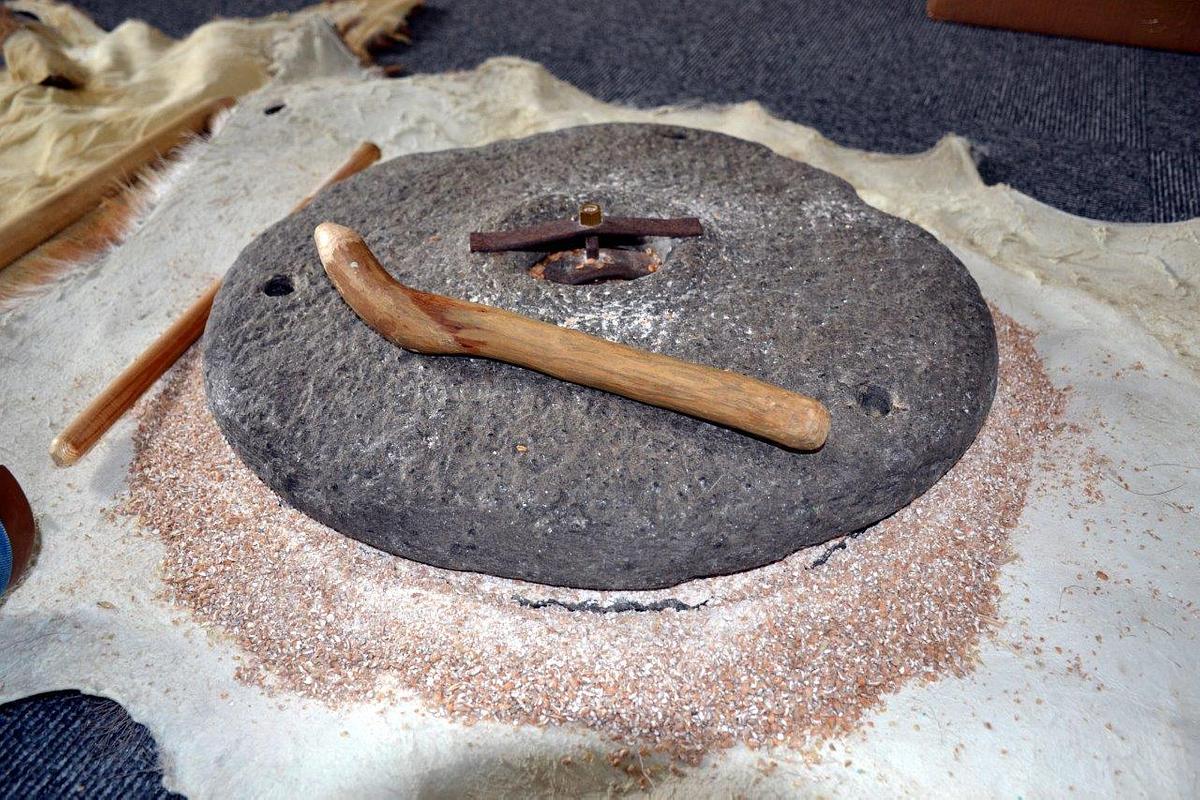 Work songs tended to be below the gaze of the early collectors but one or two gems were included in early collections of Gaelic song, such as Mun cuairt a’ bhràth, ’s na sòraibh i (‘Round with the quern and don’t pause her’) in D C Macpherson’s An Duanaire (1868) and a ‘Quern Song’ in the MacDonald Collection of Gaelic Poetry (1911). Examples of quern songs in Tobar an Dualchais such as Annie Johnston’s Brà, brà bleith (‘Quern, quern, grind’) [TAD ID 25903] match the rhythm of the stone going round, and even the more complicated compositions match this typical more ‘rounded’ rhythm. William Matheson’s Casag an Èisg (’The Satirist’s Coat’) is a fascinating example of the quern song. [TAD ID 95516] Our title here takes the first line of verses included by Alexander Nicolson in his History of Skye (1930). Turning the quern the right way – with the sun – ensured that the meal was good and that none of it would be spirited away:

If you wish the white meal to be good for you,

Round with it at speed with verse and music,

And not a speck of it will be taken to the fairy mound.’)