The Return of the Silver Chanter

This article was first published in the Westi Highland Free Press on Friday 29 July 2022 and was written by Dr Decker Forrest who is programme leader for the BA (Hons) Gaelic and traditional Music at Sabhal Mòr Ostaig. He is a piper and past participant in the Silver Chanter Competition.

The Great Highland Bagpipe – a’ Phìob Mhòr – is a remarkable musical instrument. It is of course just one of many derivations of bagpipe from throughout Europe (including Scotland itself, where several others are established also) and parts of Africa and Asia, and yet it is the one most internationally recognised in both image and sound. Like the kilt, it has become a symbol of pan-Scottishness; its importance and relevance having spread through invention, reinvention and preservation across Scotland and abroad over generations. Indeed, it goes without saying that many Highland pipers with little or no connection with the language and culture of the Highlands and Islands of Scotland have, along with their associated communities including other musicians, instrument makers and audiences, contributed hugely to the growth and evolution of the Great Highland Bagpipe, particularly over the last 150 years or so.

The Great Highland Bagpipe is, nevertheless, indigenous to the Gàidhealtachd – the most fundamental characteristics of its sound, tonality and musical forms stretching back over hundreds of years and interwoven with a wealth of related stories, historical legends, proverbs, poetic verse, and cultural associations preserved in literature and oral tradition. A fascinating and unique relationship with song and Gaelic language rhythm has long been central to the composition and musical interpretation of pipe music. Even a rich and comprehensive list of technical terminology for the constituting parts of the instrument itself and many of the ornaments and structural elements of its musical forms exists, having been passed down by Gaelic-speaking pipers and non-pipers alike for centuries. The Great Highland Bagpipe is Scotland’s National Instrument, but alongside its broader cultural associations is a unique and complex sense of meaning that, for many, goes right to the heart of Gaelic cultural identity.

Next week will see the return of the Piping Live! Festival in all its pre-covid, in-person, glory. The nine-day festival is based in Glasgow and features a broad range of piping-related events with artists from all over the world. This year will be exceptional in that through a collaboration between the National Piping Centre and Sabhal Mòr Ostaig, the festival will extend its geographic range to Skye with the return of the Silver Chanter Piping Competition that had removed from its former venue at Dunvegan Castle to Glasgow in 2018. The competition was established in 1967 by Dame Flora MacLeod, 28th Chief of MacLeod, alongside Seumas MacNeill and John MacFadyen and, rather uniquely for a piping competition, celebrated the music of one of Gaeldom’s most recognised dynastic musical traditions, the MacCrimmons, in its historical homeland.

The return of this event to Skye is cause for celebration and gives an opportunity to reflect on the important place of the MacCrimmons in Gaelic oral tradition. Naturally, Tobar an Dualchais is full of examples of stories related to the MacCrimmons and reminds us of the extent of their presence in songs and legends and associated locations in and around Borreraig, where they lived for several generations. Murdo MacLeod (‘a Bhìg’ 1883-1968) from Borreraig described the place where the MacCrimmons had taught and told of how those at Dunvegan Castle could listen and dance to their playing which emanated from Slochd nam Piobairean, where they practiced (ID 76015). MacLeod also described the cave at Harlosh where one of the pipers entered playing, never to return – but more on that to come… (ID 76112). 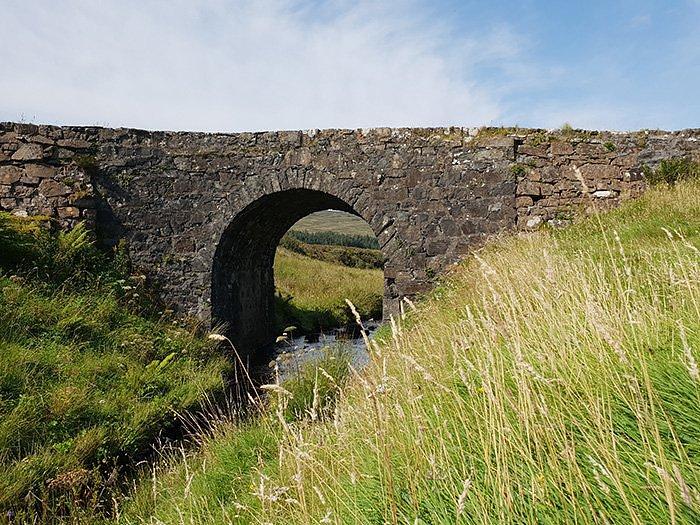 We might begin with the legends surrounding the Silver Chanter, gifted to a MacCrimmon long ago by a fairy, and from which the competitions’ name takes its inspiration. Stories connecting piping with the supernatural abound and emphasise the magical power of music. Examples of historic pipe chanters said to have been gifted from the fairies still exist – am Feadan Dubh Chin Tàile (The Black Chanter of Kintail of the MacRaes) and am Feadan Dubh Chlann Chatain (The Black Chanter of Clan Chattan). The tropical hardwood used in these instruments probably dates them to the early decades of imported timber from the colonies; their unique dark appearance and unusually sonorous qualities were no doubt popularly rationalised as having come from the ‘otherworld’. According to some, the MacCrimmon’s fairy chanter was also black in colour and its story of having been gifted to a MacCrimmon is described by Marjorie Gillies (Marsaili Iain Mhòir) from Glenelg (ID 28857) and the aforementioned Murdo MacLeod (ID 76114). More often, however, it is the innate ability to play which is the gift rather than a magical chanter. In these stories, of which there are many variants, a piper of poor ability but with strong determination meets a fairy who gives him his extraordinary skill but on certain conditions which he, or others in his family line, eventually break. I will not spoil the story for those who have not heard it and instead would encourage you to visit the website and listen to any number of related tracks, including those of Patrick MacCormick (ID 32013), Mìcheal MacIntyre (ID 42459) and Archie MacDonald (ID 44740).

Many will have heard one or more stories and songs named Cha Till MacCrimmein or MacCrimmon will Never Return. They generally fall into one of two categories: the first concerns an unidentified MacCrimmon piper and invokes the motific legend of Uamh an Òir – The Cave of Gold. In this tale (again with many variants and locations), the piper goes into a cave playing his pipes and does not return. In a song version by Lexy Campbell (1894-1986) from Glen Pean, we get a sense of what might have befallen him:

‘Sorrowful am I that I have not three hands; two for the pipe and one on the sword’. MacCrimmon could not protect himself from the whatever mortal and supernatural dangers confronted him in the cave without the simultaneous magic of his piping and the use of his sword (ID 52949).

The second theme is based around Dòmhnall Bàn MacCrimmon who, as presaged, was killed at the Rout of Moy in 1746. Here, Dòmhnall Bàn accompanied a party of soldiers set on an ill-fated attempt to capture the Prince just prior to Culloden. A contemporary account tells us of how “A few hours previous to his being killed a Skye friend of MacCrimmon’s possessed the second-sight, chanced to meet the latter, who was a tall, well-built Highlander, in the streets of Inverness. On parting this individual (Patrick MacAskill) saw the piper ‘all at once contracted to the bigness of a boy of five or six years old’ and immediately, with the next look, resume his former size.” The nature of this vision was clearly understood to foretell death.

Within the collections of Tobar an Dualchais are a couple of stories which include an element which has been sometimes applied to both the Uamh an Òir and Dòmhnall Bàn themes. Murdo MacLeod tells of a MacCrimmon who, on heading to the cave to play, meets a fairy woman who tells him that if his wife has laid everything out on the table for supper as usual, he will return. If anything were to be missing, however, he would not. As it happened, MacCrimmon’s wife forgot to put butter on the table, and so he never returned (ID 76112).

The more general idea of a MacCrimmon going away never to return gained popularity during the nineteenth century and particularly so, it would seem, after Sir Walter Scott’s song ‘MacKrimmon’s Lament’ – vaguely reminiscent of the Dòmhnall Bàn motif – was published in 1818. Versions, in spoken word and song, spread far and wide and seem to have been popular with the Traveller Community as several wonderful recordings of the likes of Lizzie Higgins (ID 66017) and Jeanie Robertson (ID 23050) illustrate. The theme is, of course, deeply metaphorical and echoed the catastrophic social upheaval which followed Culloden and saw, along with so much else, the destruction of the dynastic piping traditions. The fate of the MacCrimmons was summed up by JG Lockhart in his description of Dòmhnall Ruadh MacCrimmon in the early nineteenth century who, along with Iain Dubh were the last of the hereditary MacCrimmon pipers before the modern era: “He is an old … lieutenant in the army, and a most capital piper, possessing about 200 tunes and pibrochs, most of which will probably die with him as he declines to have any of his sons instructed in the art.” In oral tradition, we hear of the musical power of the MacCrimmons ending after one of the later pipers of the family spoke ill of the fairy chanter causing it to be taken away along with the family’s gift of extraordinary piping. Murdo MacLeod tells us that after a fairy took away their power, later MacCrimmons who tried to play were no better than any other pipers – “chan eil iad ach mar phìobairean eile” (ID 76015). It is encouraging to reflect, however, that several MacCrimmon descendants have, in recent years, emerged and would certainly challenge this assertion!

This year the Silver Chanter will be held in Sleat at Sabhal Mòr Ostaig on the evening of the 3rd of August after the Skye Highland Games. The irony is not lost on the organisers that this venue is in the heart of MacDonald territory and had one of MacLeod’s MacCrimmon pipers been found playing near Ostaig in the 17th century, his reception would not have been as warmly enthusiastic as that which will be conveyed to the pipers performing next Wednesday evening! Nevertheless, the return of the Silver Chanter competition to Skye is a blessing for the international piping community and will hopefully serve to help encourage and reinvigorate the connection between Gaels and their unique piping heritage.